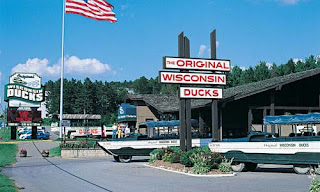 The Wisconsin Dells is a semi-legendary destination for those who dwell in the American Midwest, and a place entirely unknown, I suspect, to the rest of the world.  A summertime mecca for generations of families from Wisconsin, Illinois, Michigan, and other regional states, the Dells have always been synonomous in my mind with station wagons and mini-vans. (And cheap Indian headdresses, foam tomahawks, and the Ducks.)  It's a substantially different city than it was when I visited it in my youth; the current incarnation is something like a Las Vegas aimed squarely at 11 year old kids and their beaten-down parents.  As a result, the amount of minivans and, yes, station wagons, jamming up its streets with desperate fathers and sun-stroked kids have increased exponentially.  It seems an odd place to take a cycling vacation.


Nevertheless, that's the exact situation I found myself in last week.  I didn't point my car south and drive 30-some hours just to try my luck with the cars and WWII-era assault vehicles that populate its roads, of course.  I was in the area on some family business, and the Dells provided a handy location to meet some old friends living in Michigan, particularly handy because of the three very small children in the mix.  The male parental unit of the friends we were meeting, though, was an fine cycling buddy from my Tucson days--the very friend who had introduced my to the 24IHITOP way back when.  So, with both of us in the same place for a few days, it was a must that some bikes be broken out, some pedals turned, and some miles accumulated. 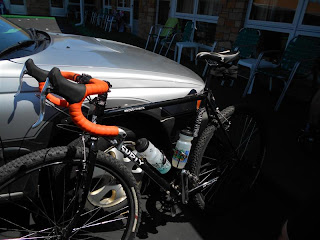 Our Man in Marquette, as I'll call him, is mostly a mountain-bike racer these days, an animal in the dirt and snow, but I wouldn't have access to trails at any other point in my vacation, so he generously agreed to bring something with 700c wheels down.   Even so, it had knobby wheels and looked fast sitting still.  To illustrate the degree to which he's transferred is love to the dirty side of the cycling world, he took the time to note how skinny my bike's tires were.  I am, of course, running 38s.


Our plan was to load the bikes into the car and take a 35-minute run down the highway to state rec area in the hopes of finding some dirt roads and gentle trails.  Wisconsin has a lot of woodsy paradise on offer, and we hoped to tap into it.  But, with those aforementioned three small kids in the mix, plans shifted and changed, and it soon became apparent that our ride was going to start at the door to our motel rooms and run alongside the greater Dells area.

A quick conference with Google Maps suggested that the fastest way out of town was right down the main drag, following Route 23 until we were clear of the strip.  Luckily, the main roads in the Dells have bike lanes, presumably because the immigrants and college students who make the town run need a way to get to and from their jobs, but they don't seem to mean much in the face of tourists and shuttle bus drivers.  Also, the part of 23 we needed to use didn't have one.  Nevertheless, we dove in and charged on.  And then, with a turn slightly to the left, we saw something quite different than the Dells.

I wouldn't believe it if I wasn't typing it myself, but it the Dells are perfectly competent at hosting a cycling vacation.  Not more than ten minutes of riding took us out of town, out of sight of waterparks and rollercoasters, beyond even the reach of golf courses and resort complexes. We had smooth tarmac, bright sunshine, and blue skies.  We happily set to turning our cranks to see what we might see. 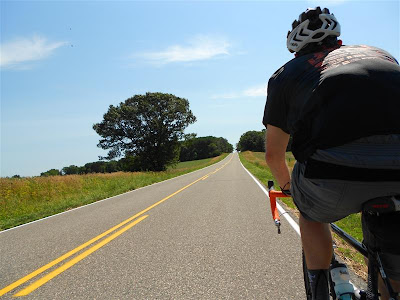 And what we saw, pretty much everywhere we went, was more of that smooth, black pavement and a bunch of clean air.  What we didn't see, at any point really, was anything in the way of cars.  I suppose the nexus of attractions in the center of town is too powerful a magnet for very many vehicles to escape.  Bikes, though, remain charmingly immune to most such effects. 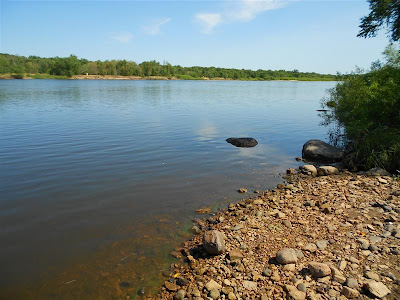 The roads took us to a number of scenic places; this lake was an easy sight to capture.  The two foxes and the wild turkey we spotted were considerably less so.  We roamed around the area in search of as many of these spots as we could find in the few hours we had at hand, even taking a turn down a dead end road in honor of Jasper's latest philosophical inquiry. 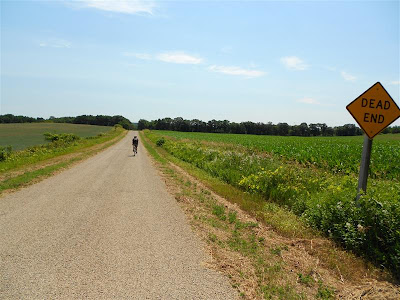 We were, at this moment, in search of  some gravel to grind, if not a dirt road or old cart path.  Our Man in Marquette's big knobby tires cried out for some sort of broken surface to clutch.  Alas, it was not to be.  Whatever that surface in the photo above looks like, it's actually just old, nice pavement with some pebbles on top.  Our miscalculation was in not considering that when you have Wisconsin Dells as part of your tax base, pretty much every inch of road in that county is going to get plenty of care and attention.  No matter, though. for all riding is fine riding.  And even with those big, fat knobbies, Our Man in Marquette kicked my ass along every mile anyway.
MY miscalculation was in forgetting that Wisconsin is filled with what science calls "topography."  That's mostly a meaningless term where I do most of my riding, in and around the prairies where Edmonton sits.  Please note that the road in all of those photos has a generally uphill curve.  The one where it doesn't, the lake, is only because I was facing away from the 6% grade that led down to it.  It's a different kind of riding when you're climbing half the time or more, but never for more than a few minutes.  It wrecked me, but it was like living through a memory, and I was thankful for it.

I was more thankful, though, for the time to ride with an old friend.  I could take this post into territory where I compare the relative entertainment value of an incredibly complex tourist attraction to a stretch of good row, or perhaps I could weigh in on whether one's soul is better served by green fields or upside down White Houses . . . but I won't.  I'm just going to be happy to have had a nice ride and to have been validated in hauling a bike across the continent.

I have faith that the ride will be there, and this time, it was.