I'd like to propose a little experiment to our loyal readers.  I'm going to undertake something I'm calling Every Day May.  Quickly tossing the phrase to Google will make clear that I'm not the first person to think up the idea or enjoy its simple rhymes.  This guy claims to have invented it, though there's some triathlon version out there, too.  And, of course, the arts crowd has their version.  It's entirely possible, however, that the term is so popular precisely because it's such a good idea.  Or catchy.  But I'm going with good.

I have long thought of sports gel packs in much the same way I think of fluoride treatments at the dentist—as disgusting but beneficial semi-fluids. In my experience, most gel packs and fluoride treatments taste awful, like some unholy combination of artificial flavor and rancid yak butter. Both are a cruel tease: you’re offered a misleading array of “flavors” to choose from, as if you’re selecting ice cream, pop, or candy. So you get your hopes up, only to have them dashed when your taste buds get involved.

The Ride of Spring 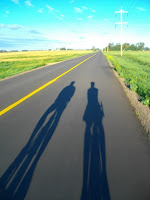 I happened upon this photo the other day, in a pile of old papers on the corner of my desk. It was taken last July, on an early morning ride with my pal Penn, at a secret location somewhere south of Edmonton. I remember the ride well; it was one of those startlingly bright summer mornings we get here in central Alberta, and we found ourselves on a nice stretch of new pavement. I did a double-take when I saw this photo. The colors—that intense green and gold and the impossible blue—just about took my breath away. I'd forgotten that such colors were even possible.

Phoenix sucks for cycling. At least that’s what Val, a one-time Tucsonan, had told me (many times, in fact), and that’s what I had heard from more than one contributor to on-line forums discussing Arizona’s version of the great cycling debate: Phoenix vs. Tucson—which is better for cycling? Phoenix, so goes the argument, is enormous, sprawling, freeway-laced, concrete-filled, and generally not cycling friendly. Tucson, however, according to loyalists, being a more manageable size, is easy to get across on a bike, close to some great climbs, and home to a thriving bikey culture—in other words, it is a fabulous cycling centre. Now that I’ve visited and cycled in both cities, it’s time to weigh in with my two bits on who gets the nod in this epic battle.
This way to the rest . . .
Posted by Jasper Gates at 10:37 PM 3 comments:

Our first guest post at the Dusty Musette arrives courtesy of Anon A. Moose:  She's shared a little flake of memory, a prose poem of sorts.  Enjoy.

Found a perfect desert road this morning. I’ve been riding around northeast Phoenix (Scottsdale and Fountain Hills) in the mornings all week while on a family/cycling/baseball getaway from the crappy Alberta April. Although the roads here have been technically excellent—wide bike lanes, clean shoulders, smooth surfaces—and the scenery chock full of grade-A desert vistas, something had been lacking in the rides so far. I’m still relatively new to desert riding; this is only my second visit to Arizona. Just this morning I realized what it I liked so much the first time around: desert silence.