The Greatest: The Life and Times of Beryl Burton 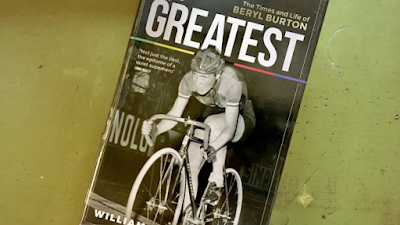 Who is the greatest cyclist ever? Fausto Coppi? Eddy Merckx? Maybe Jacques Anquetil or Bernard Hinault? Respected British cycling journalist and biographer William Fotheringham makes the bold case that that mantle actually belongs to a lesser known name: British phenom Beryl Burton. In terms of span of career, number of titles captured, and absolute domination of her field, no one comes close to “BB,” explains Fotheringham.

These days Burton’s name isn’t widely known outside of Britain, but the career numbers she accumulated are astonishing--for any sport. From the mid 1950s to the 1980s, she won 90 domestic championships and 7 world titles; for 25 consecutive years she was the Best All Round female time trialist in Britain; her 100-mile record lasted 28 years and her 12-hour record an incredible 50 years. At her peak, she regularly beat some of the best British male cyclists in time trials--including eight-time Tour de France stage winner Barry Hoban. Her 1967 12-hour time-trial distance (277 miles) stood for two years before it was bested by a male cyclist.