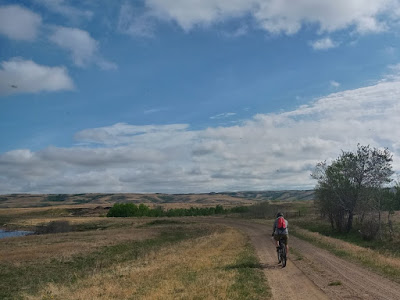 I recently spent a couple of days exploring some of the off-pavement options in the Neutral Hills in east-central Alberta, near Consort, and I can report that even though I only rode a fraction of it, this area has lots of potential for adventurous gravel cyclists.

We camped at Gooseberry Lake Provincial Park, about 15 km north of Consort, which turns out to be a great starting point for cycling. To the south and east, it’s your typical prairie gravel roads, all fine and well, but to the north and west things get interesting. The hilly terrain reminds me of another Alberta terminal moraine, the Porcupine Hills area near Claresholm--similar topography and similar “roads,” if that’s even the right word. The hills are bestrewn with totally bikeable tracks and trails, most of them private but some of them public.