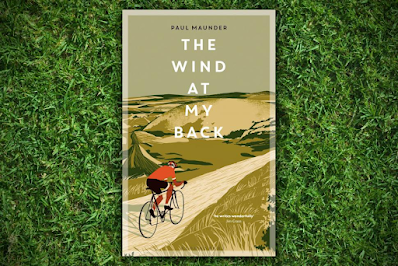 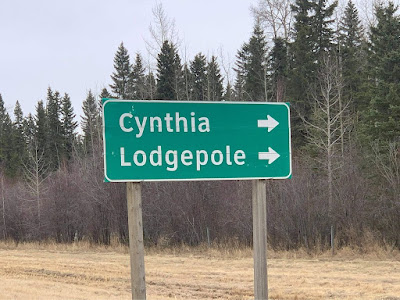 When the protagonist of Heidi Jacob’s lovely, very funny, and deeply literary debut novel Molly of the Mall (the perfect gift for that English major in your life) mentions adopting the pseudonym "Cynthia Lodgepole" for publishing her “gothic bodice-rippers,” it’s a wink and a nudge to anyone who’s ever noticed this road sign on the Yellowhead Highway between Edmonton and Jasper.

The names of these two little hamlets 23 km apart in Brazeau County near Drayton Valley, Alberta, do kind of go together, and I’m sure I’m not the only one–besides Heidi Jacobs–who thinks, every time I see the highway sign, of what a great pseudonym this would make. Kudos to Heidi’s Molly for pulling it off.

Yet despite all the times I’ve driven past the sign, I’d never visited either place. Until last Saturday, that is, when I rode my bicycle through both on the route of the DV100, an annual century-ride (pavement) event that I took part in for the first time. This event has been around for 10 years and has a solid reputation in cycling circles in these parts: it’s known for being well organized and scenic, and for putting up a surprising amount of prize money. 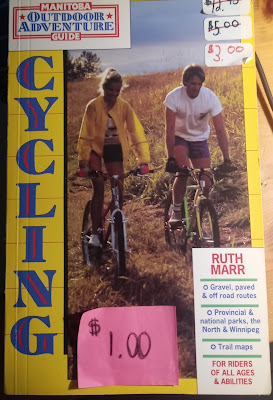 But what really caught my eye was the phrase in the bottom right corner: “Gravel, paved, & off road routes.” Gravel? Really? And not only is the word gravel included in this list, it’s the first item in the list. Turns out this Manitoba Outdoor Adventure Guide: Cycling was published in 1989 by Fifth House (Saskatoon) and written by a then 32-year old Ruth Marr, who’s listed on the back cover as “a Winnipeg writer and ecologist.”
This way to the rest . . .
Posted by Jasper Gates at 10:05 AM No comments: 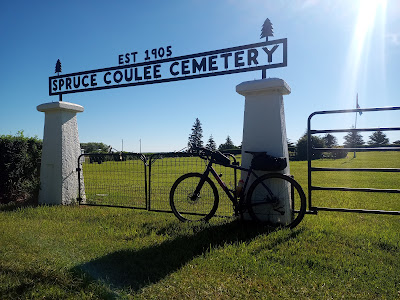 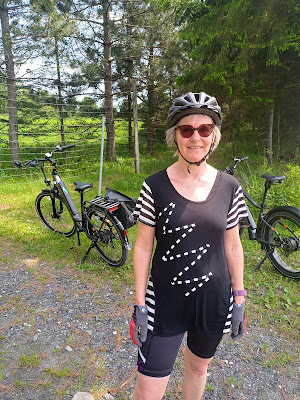 Posted by Jasper Gates at 11:22 PM No comments: 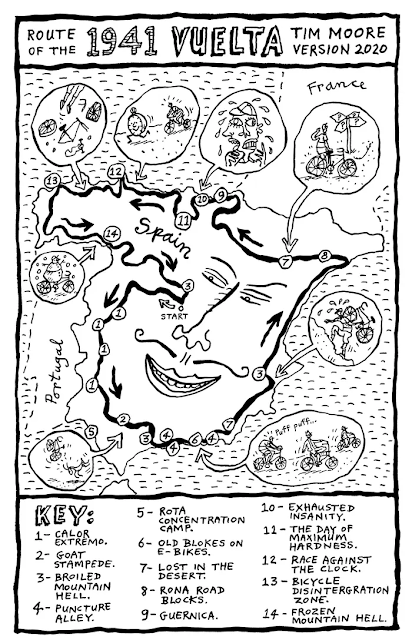 We’ve had to wait a while for the final installment in Tim Moore’s Grand Tour trilogy that began with French Revolutions: Cycling the Tour de France (2001) and continued with Geronimo! Riding the Very Terrible 1914 Tour of Italy (2014). A book from Moore about La Vuelta a España was inevitable, and highly anticipated by many, including me, but the timing of when he finally undertook the project turned out to be something of a surprise. Moore needed an angle for this book, and it wasn’t until the COVIDy spring of 2020 that he stumbled on it, when he came across the remarkable story of Julián Berrendero and the strange 1941 campaign, the smallest grand tour ever, with only 32 starters, as well as the longest, at a mind-blowing 4442 km.
This way to the rest . . .
Posted by Jasper Gates at 3:15 PM 3 comments: 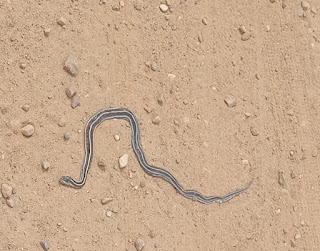 I’ve been trying to think of the best word to describe yesterday’s wind: Brutal? Ferocious? Punishing? Merciless? Soul-crushing? In the end, I think I’ll settle on “traumatizing.” As in, this is a wind that will leave a permanent, if small, impression on my psyche, haunt me in some minor way.

This wasn’t how it was supposed to go. Traditionally, at the Dusty 100, the wind is from the west, which makes for a tough first half and a larkish homestretch. The final 25 km along the Victoria Trail is the most scenic part of the route and, usually, the quickest. But not this year. With a rare east wind, which kicked up dramatically in the early afternoon, the final stretch involved a special kind of suffering.

Even before we turned east into the stiff clip, my legs were weary. But as the wind intensified, it became clear that it was affecting my mind as well as my body. I began to experience that psychic (and cyclic) fragility that only wind can induce in a cyclist. Of course I can ride 20 more kilometres, no matter how hard, but . . . can I?

The wind got stronger and stronger as my resolve weakened. By the time we hit the Northwest Mounted Police monument, it was blowing 40 kph, and the flags were stretched out straight. My speedometer ticked ever downward; clouds of dust swirled above the gravel.

(It’s happened to me before, this kind of mind-melting wind. I think of that day in Montana in 2007, when touring with Penn and Cousin Larry. We still talk about that one. We limped off the bikes after a gruesome afternoon of grinding headwinds and just sat silently at that campground picnic table, staring off into space. Couldn’t eat, couldn’t sleep–our bodies vibrating from the exertion, our minds stunned. We could have gotten tattoos to commemorate the experience.)

Thankfully, I wasn’t alone. Most of the riders were well ahead, but Brent was with me the whole miserable way. We worked together and tried to cheer each other up. But at a certain point, the wind sucks the conversation out of you. You don’t even have the energy to talk anymore. It’s just head down, one pedal stroke after another. Click, click, click, incremental progress. We will get there eventually. Won’t we?

I’ve never been happier to get a flat tire, just so I could have an excuse to rest. As I was putting in the new tube on the side of the road, the wind almost knocked me over. Then back in the saddle, a few clicks closer to the end, I saw this dead garter snake on the road and thought, "Poor bastard. Some have it worse.”

At one point, about 10 km from the finish, as Brent and I were pulled over at the side of the road, a farmer stopped in his truck to ask us what was going on with all these bicycles on the road and to comment, of course, on the conditions. When I told him the name of our event he laughed out loud. “Perfect,” he said. “That’s perfect.” 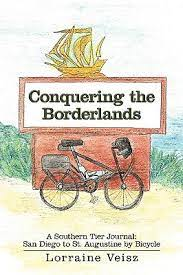 Two things attracted me to this little-known self-published 2009 cycle-travel book that I first heard about on BicycleTouringPro.com: 1) the age of the author (Lorraine Veisz doesn’t say exactly how old she was when she did this trip but I’m guessing, from clues in the book, such as her mention of having done a bike trip with her husband in Maine in 1971, that she was around 60 years old) ; and 2) the fact that Veisz did the trip from San Diego to St. Augustine as part of an organized bike tour.

The age thing first: Probably because of my own age (55), I’ve become interested, of late, in cycle-travel books written by people who are around the age of retirement (though that dream is still a ways off for me). Much like the young person’s coming-of-age bike-trip book (think Josie Dew’s The Wind in My Wheels or Kate Harris’s Lands of Lost Borders), the bookend “going-of-age” cycle-touring book, by a person transitioning out of the working world, has become a popular sub-genre of its own. (See, for instance, Anne Mustoe’s A Bike Ride or David Lamb’s Over the Hills.) Veisz captures the rich possibilities and particular anxieties of this period in her description in the opening pages of this “stage in life when one begins to question if it is still prudent to pursue old dreams, when responsibilities have been largely met but physical limitations are lurking is a type of chronological borderlands.” 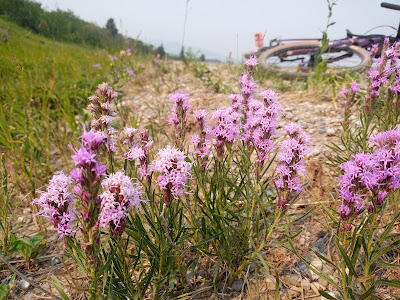