Across Siberia on a Bicycle 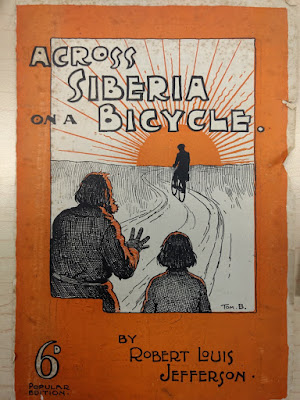 Siberia. The word conjures images of endless ice and snow, not to mention hints of forced isolation and punishment. The vastness, harshness, and remoteness of the place makes the very word Siberia cause shivers of trepidation for many—and tingles of excitement for a few hardy adventurers. Riding a bicycle across Siberia may sound like a mad feat, but it’s been done, and more times than you might imagine. I can think of a handful of books about trans-Siberian bicycle trips, by Erika Warmbrunn, Jane Schnell, Mark Jenkins, and Rob Lilewall, to name a few.


But one of the first to do it was the English cycle-adventurer and author Robert Louis Jefferson. Born in Missouri in 1866, Jefferson grew up in Victorian England, where, as a young man, he was an impressive athlete and, later, a journalist. (He shares the Christian names of the celebrated contemporary Scottish writer Robert Louis Stevenson, and Jefferson admits that these names came in handy more than once in the world of writing. He once told an interviewer, “anything by a man with those prefixes was certain to sell.”)

In the 1890s, as the bicycle boomed, he embarked on a series of extensive adventures awheel, which took him from London to Constantinople, Russia (twice), Mongolia, and Uzbekistan. Jefferson wrote a book about each trip, the first published in 1894 and the last in 1899. Although the cycle-travel-adventure books of his contemporaries Thomas Stevens, William Sachtleben and Thomas G. Allen, and John Foster Fraser are better known, Jefferson was one of the most prolific cycle-travel writers in this inaugural golden age of trans-continental bicycle adventures.  Yet for some reason, his legacy remains obscure in comparison, and his books, today, are hard to find. Not a one is in print, even in this age when some of the most obscure Victorian texts can be acquired via print-on-demand publishers.

But with a little work and the help of inter-library loan, I got my hands on a copy of Across Siberia on a Bicycle (1896). And while the volume is brief and uneven, to be sure, it offers enough insight into early bicycle-adventure travel and some perverse bits of entertainment to make it worth checking out.
This way to the rest . . .
Posted by Jasper Gates at 3:21 PM 3 comments: 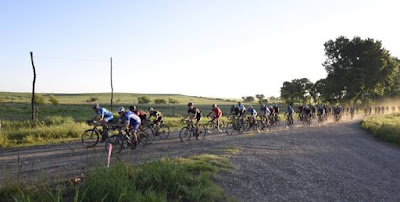 Could 2018 be the year of gravel cycling's big breakthrough in Alberta?

The lack of a thriving gravel-cycling scene in this province—and the prairie provinces, in general—has long been a puzzler to me. South of the border, in the equivalent landscape known as the Midwest or Great Plains, cycling on the thousands of miles of gravel backroads has been a thing for years.

It’s difficult to find data on the actual number of gravel riders, but just consider, as an indicator, the number of gravel-cycling events in the midwestern and western United States: competitive races (such as the Dirty Kanza and Gravel Worlds); more recreational rides and fondos (such as the Cino Heroica and Rebecca’s Private Idaho); and any number of informal, unsanctioned, no-fee rides. Throughout Kansas, Iowa, Nebraska, and the Dakotas you’ll find some kind of gravel-grinder event happening almost every weekend in the summer months. Check out the event listings on Gravel Cyclist to get a sense of the burgeoning American scene.
This way to the rest . . .
Posted by Jasper Gates at 11:07 PM 11 comments: