Phoenix sucks for cycling. At least that’s what Val, a one-time Tucsonan, had told me (many times, in fact), and that’s what I had heard from more than one contributor to on-line forums discussing Arizona’s version of the great cycling debate: Phoenix vs. Tucson—which is better for cycling? Phoenix, so goes the argument, is enormous, sprawling, freeway-laced, concrete-filled, and generally not cycling friendly. Tucson, however, according to loyalists, being a more manageable size, is easy to get across on a bike, close to some great climbs, and home to a thriving bikey culture—in other words, it is a fabulous cycling centre. Now that I’ve visited and cycled in both cities, it’s time to weigh in with my two bits on who gets the nod in this epic battle.


Last April I spent a week riding in Tucson with Val and Penn; this past week I was in Phoenix with my family, and though I didn’t put in the same kind of miles there as I did in Tucson, I got out for a ride most days. Now I admit this comparison isn’t a fair fight. In Tucson, Penn and I had a savvy and enthusiastic guide, Val, who knew the cycling scene inside and out, and who took us to various funky corners of the city and its environs. I got to see some of the best that Tucson has to offer cyclists. In Phoenix, meanwhile, I was cycling on my own (except for a couple of family rides on the Scottsdale greenbelt) and only explored the northeastern corner. Sure, I had done my research and scoped out routes, but that’s a poor substitute for having a keen, native guide. So, yes, I readily admit that I’m pretty much talking out of my ass on this topic, given that  a week isn’t much time to make a thorough, fair assessment of each place. But hey, isn’t such half-informed ass-speak the very stuff of the blogosphere? 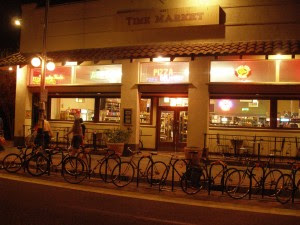 I have fond memories of my cycling week in Tucson. The place did feel like a big town rather than a major city, and it was surprisingly easy to get across or out of town via bike-laned thoroughfares, with little freeway canoodling required. We rode some memorable routes: over Gates Pass, up and down Mount Lemmon, through a saguaro forest. But the memory of Tucson that lingers most strongly in my mind is the Time Market. This funky store/café in the university district is a hot spot of the Tucson cycling scene. It’s even got a bike corral out front. Looking out the window, sipping our espresso, we saw the full spectrum of the city’s diverse cycling culture whizz by: serious club riders, commuting university students, recumbent dudes, cargo bikes, old hippies (like the bare-chested, jean-wearing, long-haired dude we saw on a $5000 bike) out for a leisurely spin.

Going to Phoenix this year, my expectations were low, based on Val’s bias and what I’d read on-line. But where I stayed and rode, in Fountain Hills and Scottsdale, the riding was actually pretty sweet. I saw lots of generous bike lanes and smooth roads, stumbled onto some quiet back roads on the edge of the city (yes, there is an edge), and meandered down a surprisingly pleasant 15-mile urban bike path connecting Scottsdale and Tempe. On Easter Sunday I got out for a 5-hour ride around Rio Verde and I saw well over a hundred cyclists on the roads. Some of them even talked to me, answering my dumb questions and offering advice about where to cycle in and around the city. It was all fine.

Though cycling in Scottsdale is a bit surreal. Wonderful roads, League of American Bicyclists designation and all, sure, but everything is so unnaturally green  (for a desert) and eerily clean—a little too immaculate and manicured for my liking, a sort of Singapore of the Southwest. After a while there is a certain sterility to such well-groomed landscape. Hanging out in Scottsdale did make me feel  young though. The well-heeled white-hairs dominate there; I felt a veritable whippersnapper in comparison. Scottsdale also made me feel relatively poor. There is an obscene, if mostly tasteful, display of wealth everywhere you look—the houses, the vehicles, the golf courses. Plus everyone is white—the diversity of Tucson, or even of the ball park in Tempe, makes for a startling contrast to Scottsdale’s white-bread homogeneity.

I enjoyed my time cycling around Phoenix. It didn’t suck. However, my sense is that Phoenix is a really big-ass city with some decent cycling infrastructure (at least in Scottsdale) that happens to be home to a lot of devoted cyclists. And devoted cyclists anywhere will always find places to get out and ride. Tucson, however, is cozier, funkier, easier to get around, has even better and more widespread cycling infrastructure, lots of riders—and the all-important  intangible factor: a distinct and wonderfully wonky cycling vibe. Bike riding is a part of the very spandex  fabric of life for an awful lot of Tucsonans. Maybe I didn’t go to the right places in Phoenix, but I didn’t get that feeling.

When it comes to deciding who wins the battle of Arizona cities, Phoenix gets a hearty pat on the back, but I have to raise the hand of Tucson in victory.
Posted by Jasper Gates at 10:37 PM