It’s early July, which means school’s out for the kiddies, the year’s hot dog quota has long been filled, and almost every other day seems to be a national holiday of one land or another. And, of course, it means Tour de France season. Now, cycling fans have their Tour traditions. Apparently some French fans like to don body thongs and run along the side of the road cheering on the competitors. Others, on this side of the Atlantic, may simply choose to take their breakfast with Phil Ligget and Paul Sherwin while watching the day’s stage unfold on tv. Me, I’ve got my own take on Tour traditions: I like to suit up in my body thong, tune in to Phil and Paul, and pick up a book about the Tour.

This year’s Tour book, which I just finished and heartily recommend, is British journalist Richard Moore’s Slaying the Badger (2011), about the 1986 Tour, which featured a fascinating showdown between five-time winner Frenchman Bernard Hinault and up-and-coming American Greg Lemond, uneasy teammates on the powerhouse La Vie Claire. Hinault’s career was winding down. In fact, his victory the previous year was due in large part to Lemond’s help, which Hinault acknowledged during the ’85 Tour with a public promise of sorts to assist Lemond to victory in 1986, in Hinault’s final Tour. The only catch? By July of 1986, Hinault seems to have changed his mind, and his tactics in that race suggest he wanted the yellow jersey after all, leaving Lemond feeling betrayed and confused. In the end, Lemond does win the ‘86 Tour (the first of three for him, in fact), but only after a remarkable, largely psychological, struggle with his own teammate Hinault. In Moore’s hands, it all makes for a terrific story, full of drama, intrigue, a cast of compelling characters, and even a bit of mystery. Plus, the book captures the larger tensions of that era of cycling, when modern, North American–influenced, scientific approaches began to infiltrate old school, Euro traditions. 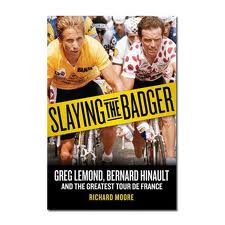 The trick to pulling off a book on this subject is to find some way to get beyond the Hinault-as-Bad-Guy, Lemond-as-Good-Guy version of this story that North Americans have been fed over the years. That fairy tale has always seemed overly simplistic. Hinault has usually been portrayed as something of a villainous caricature: handsome but gruff and arrogant; uneducated, simple but nonetheless devious; a quintessential alpha-male athlete with a primal, instinctual, fierce need to dominate, unburdened by intellect or conscience. They didn’t call him the Badger for nothing. Likewise, Lemond has always had this blond-haired, easy-going American underdog thing going on, from his early days in Europe to his later comeback after a hunting accident.
Early on Moore spends considerable time developing the conventional image of Hinault as surly badger-dictator of the Tour. (One soigneur describes him as a combination of Mussolini, Hitler, and Stalin on a bike.)  Hinault had a way of commanding absolute respect and asserting complete control. As one observer puts it, in those days “You couldn’t take a piss in the peleton unless you asked Bernard Hinault.”
But overall, Moore’s portrait of Hinault was a revelation to me. The Badger emerges a more complicated and enigmatic figure than I would have ever guessed. Former teammate after former teammate has nothing but kind words to say about Hinault, telling stories of his generosity, encouragement, and unparalleled leadership. Andy Hampsten’s stories about Hinault being a chatty roommate who stayed up way too late reading Popular Science magazines cracked me up. This is the same guy everyone feared?
Meanwhile, the descriptions of the young Lemond feel flat in comparison. He is portrayed as a remarkably gifted athlete, sure, but also a bit of a flake, a curious combination of naivete and paranoia, and a New World namby-pamby when it comes to his confusion over how to respond to Hinault’s bullying. By the end of the book, I actually liked Lemond less than I had before, despite the fact that he’s supposedly the underdog-hero in this story. (And I think I finally understand how the once media-hostile Hinault has ended up today’s company man for the Tour, grinning on the podium every day, while Lemond now seems be something of an outlier, criticizing the Tour from the margins.) I didn’t count the pages devoted to each, but it felt like way more space was devoted to Hinault. Some Lemond fans may find this a problem with the book, but I didn’t mind. Hate him if you want, but Hinault’s just more interesting than Lemond—at least today, when there are no more Hinaults.
In addition to the two main stars of this story, there’s a host of colorful minor characters to fill out the action: Paul Kochli (aka the Kooky Professor), eccentric and unorthodox director of La Vie Claire; Bernard Tapie, flamboyant owner of the team; and fellow cyclists, especially La Vie Claire teammates Hampsten and Steve Bauer, the fellow North American allies of Lemond, who, 20 years later, have some compelling insights.
I’ve got only one small complaint about the book. The title feels a bit misleading. “Slaying” doesn’t seem quite the right word for what happened to Hinault in 1986. Lemond beat Hinault, sure, but to say the American “slayed” the Frenchman doesn’t quite suit. That word fits better with Hinault’s style of racing—aggressive, predatory, primal—than Lemond’s, which was more cautious, opportunistic, cerebral. I suppose a case could be made that Hinault slayed himself, either out of a desperate attempt to win number six or some ingenious strategy to help Lemond while maintaining his own reputation. Or perhaps it’s a bit of both. In any event, it seems to me that Hinault was not “slain” at all; in fact, his reputation at retirement, and even now, was and is as badger-like as ever.
Still, that’s a quibble. Moore’s book is a great read now, or any time, though I have to say that reading it while watching early stages of this year's Tour made me yearn for the days before race radios, when breakaways had more of a chance at success, when a cyclist’s every move wasn’t dictated by a voice in his ear, when a rider occasionally had to think for himself and go by instinct. That kind of bike racing feels more human, more susceptible to the power and pitfalls of individual personalities. The 1986 tour had those qualities in spades. Who knows when we’ll see the like again.
Posted by Jasper Gates at 3:23 PM