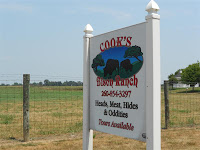 The Midwest, though looked down on by all the serious riders who have relocated themselves to Colorado, Arizona, and California, has a lot to offer the passionate cyclist.  There are no mountains, no year-round riding season, and not really much in the way of bike lanes, it's true.  But there are endless, endless miles of quiet country roads where one is surrounded by pastoral scenery and almost never delayed by an ill-timed stoplight.  Plus, you know, buffalo.


This summer is shaping up as a series of reunion rides.  Indiana brought me back into contact with a bike I haven't seen in awhile, this all-carbon Schwinn Peloton: 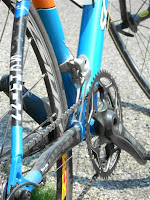 I hadn't seen the Schwinn since I had packed up and moved out of Arizona. It's been biding its time amdist the fields of southern Indiana, not getting ridden much, but perhaps soaking up some knowledge of literature and stress through a process of environmental diffusion.  I suppose I should make clear that this bike isn't mine, though it's a part of my social circle, and it even has it's own bit of cycling lore attached to it.  But this is the warhorse ridden by my old pal and friend of the blog Anon A. Moose. With both of us and both of our bikes in the same state at the same time, the moment seemed right for a spin. 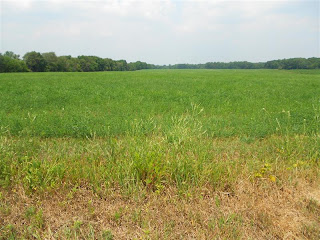 If one wanted to dismiss the Midwest as a bunch of green nothing, one wouldn't have to work very hard to explain that position.  And if your interests lie in experimental theater, classical orchestras, or advanced medical care, your arguments would probably carry the day.  But sometimes, usually when I'm astride a bike, nothing is more attractive than endless green nothing.   Mainly, I think, because in the Midwest endless green nothing isn't really endless.  The landscape is dotted with family farms and small, half-forgotten towns, a network of lightly-traveled asphalt connecting all of them.  There's always a good road, and, somewhere along that road, always somewhere to buy some lemonade or a cup of ice cream. 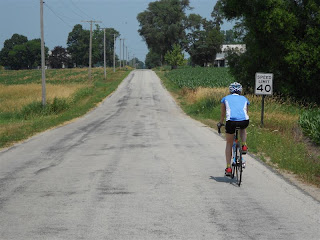 So the Moose and I set out to zip up and down some of the strands in that network, to see what we might see out there.  I haven't been on any of these roads in years; Moose hasn't even been on a bicycle.  But it only takes a few pedal strokes to set both of those things back to rights.  The thing they say about riding a bike is apparently true, though she's now firmly back in the category of the squirrel.  No pacelines for us this trip, but then again, nothing we were after really required any sort of a pace at all.


Oh, and, uh, on top of all of this, I guess the Tour de France is happening.  I'm on a different wavelength right now.