The 24 Hours in the Old Pueblo is not actually in the Old Pueblo.  It is an hour north and out in the middle of the Sonoran desert.  Most of the year it's wide-open ranch land, inhabited only by scrawny cattle, but every February a horde of cyclists invade with cars and trucks and tents and RVs.  They set up shop among the cacti and rocks, erecting shelters and firepits and idiosyncratic flags and lights intended to guide sleep-addled riders home in the dead of night.  When the race started twelve ears ago, it was probably wishful thinking to call this ephemeral settlement "24 Hour Town," but it's an impressive enough colony now that the name might have to shift to 24 Hour City.

Compared to the monster RVs that some teams park down in the heart of 24 Hour Town, our digs are considerably more modest.  Yet they are, at the same time, almost infinitely nicer than sleeping in a tent. 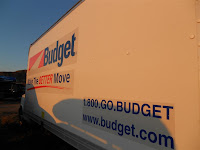 We have the advantage of a solid roof and sturdy walls if a storm rolls through, as well as plenty of storage and hauling for the supplies needed to live and ride for almost a week.  It's also cheaper than a hotel room and has probably less than half the soaked-in bodily fluids.  In the past, the Budget truck has allowed us to transport my entire living room set out into the cactus, but we travel a bit lighter now, coming as we do from every corner of the continent. 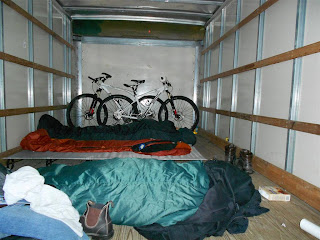 Inside, things are a little more spartan; even though hardwood floors suggest sophisticated urbane living, when temperatures drop below freezing, you still feel like you're enjoying an authentic outdoor experience.  We sleep with our steeds like some very poorly domesticated knights of old, though they have no body heat to offer.  There's a siren call to the big RVs every year--usually when fingers have gone numb or when facing a 2am walk down to an overwhelmed portapotty--but I think the year we give up this bare-bones dwelling is the year I start to feel old and indulgent.

Besides, the RVs don't have the morning views we do.

When you wake up out here, you wake up cold.  February in the high desert runs down to freezing or lower at night.  Some years see this race course coated in snow.  In those first nights out in the desert the cold is bracing, stirring the blood rather than slowing it, making tangible the difference between where you are the sealed up offices of your everyday life.  Later, that same cold will be one of the things that work hardest to keep you from excelling in the race.  The thought of another hour in the frosty black keeps many a rider huddled in his bag or next to her campfire once midnight rolls around.  But in those first mornings, it's all part of the desert's magic. 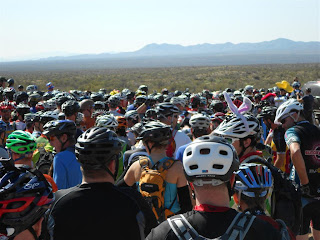 The whole thing, of course, centers around the race.  Saturday morning inevitably rolls around and hundreds of teams converge on the start.  The event gets under way with a LeMans start--a quarter-mile run to racks full of bikes.  This efficiently separates the motivated from the already-drunk, and provides an impromptu parade for the population of 24 Hour Town.  Kicking off in the full sun of Arizona's high noon, a shotgun blast sends riders scurrying for their rides.  Support crews and teammates watch the chaos and then ramble back to their tents and trucks to await the end of the first lap. 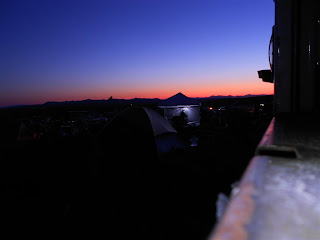 The desert sunset brings some of the magic back into the equation, although as I've said, this is start of  real test that faces the 24-Hour riders.  If you're part of a team or just there to taste the event, the sunset lap is a coveted spot.  A Western sunset is a specific, often transcendent, aesthetic experience, and experiencing it astride a nice bike somewhere out among the cacti and surrounded by like-minded fellows only amplifies the effect.  But if you're really going for it, the sunset is warning flare, a signal that a long, cold, lonely night is just getting started.  The course will soon empty out, the food stands in town will begin to close down, and without the sun, the cold will come.  The siren call of the sleeping bag can maybe already be heard, and it will only get louder from this moment on.

The race itself is a blur for cast and crew.  I have very few photos of the hours in which we actually raced, and what photos I have, I'm saving for the next post.  This post is about the flavor of the thing, and the details of this year's effort will have to wait for my next posting.

But for all the suffering and drama of those 24 hours, as long as it takes for the night to grind by, the whole thing comes to a rapid conclusion.  Riders steam across the finish line starting at noon and continue to trickle in for a few hours after.  Celebratory coffees are pounded.  Even more beers are opened.  Everyone still standing feels like a success, and then, inexplicably, every begins a second race.  They rush to strike their camps, to shove everything they own into their cars, and flee back to civilization as swiftly as possible. Sure, people probably have to work on Monday, but for awhile the madness of the camp is undeniable.  All sense of festivity is gone and replaced by an undeniable eagerness to return to normal.  I do not understand it.  By 5:00pm, 24 Hour Town is another western ghost town. 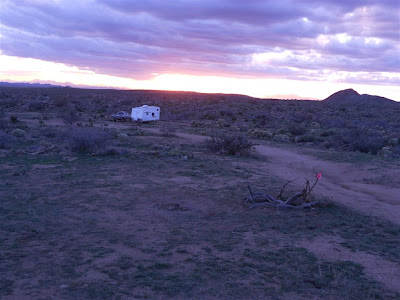 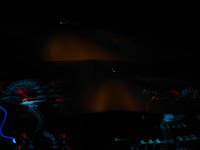 For us, too, the event must come to and end.  We are all of us sleep-addled and possessed with a passionate craving for sushi.  There is, to my knowledge, not a single fish on the Willow Springs Ranch. We pack up our house and roll for Tucson.  Once there, we order many, many rolls.
Posted by Val Garou at 12:49 AM