Things looked good for the attempt.

They had good weather: 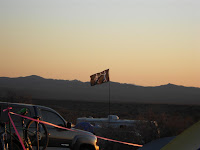 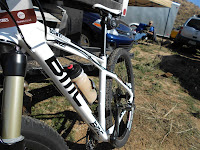 They had fine steeds.

They had calories aplenty. 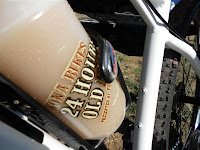 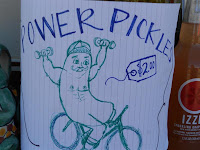 They had access to Power Pickles and fine coffee from the Peddler on the Path Mobile Cafe. 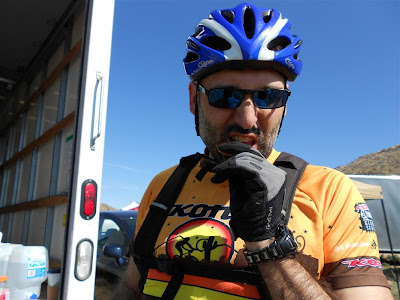 But there were still things that could come between them and success:

As I alluded to last time, the hardest thing about endurance racing is the part where you have to keep going.  The plan for Penn was straightforward.

Four laps:
The advantage of this schedule is twofold.  The first is that it obviously allows for a lot of rest.  The second is that each of these time slots has its own psychological boost.  Each lap is a unique event with its own highlights and expectations--this makes it a lot less tempting to stay back in camp.

For Tando, it was more complicated.  He churns out laps at about two hours per go, so the plan called for him to be on his bike most of the day.  We figured about 30 minutes between laps, with breaks for lunch, dinner, and breakfast.

What years of endurance tests have taught Tando and me is that unless you're one of the machines battling it out for the podium, how you ride matters far less than how you stop.  The most important thing is to keep moving--an extra 10 minutes at every rest stop in even a simple club century will probably add almost an hour to your finish time.  You need to minimize time at rest stops, or even skip the ones you think you can do without.  "Stop discipline," we call it.

Over 24 hours this becomes even more important, as there are many stops.  Time adds up and eventually you can't get that last lap in.  Or those last two laps.  Because what happens in the 24 is that somewhere around dark o'clock or half-past cold you're tempted not to add 10 minutes to the stop, but a few hours.  Sit in a chair.  Have a beer.  Take a quick nap.  A moment of weakness at 2:00am can shatter your whole race plan.

Tando hit the trails like the freight train he regularly becomes; he arrived back at the truck expressing his intent to cancel his first 30-minute rest and pile another lap onto his fire.  This sent a clear signal to me.  This was going to be a certain kind of ride.  This ride was going to be all-out.  I organized the camp and ordered another coffee in hopes of keeping up with the man.

As the hours wore on, Tando turned more and more of his higher-level cognitive functions over to me, his crew chief.  I tracked his calories, his lap times, his rest.  Tando gave up on the idea of formal meals quickly and I started to massage his data.  By the middle of the night, deep in the haze of effort and toil, he believed himself to be on schedule to achieve his seven laps.  I had him flying towards a different number altogether.  Now, of all my jobs, stop discipline was the most important.

Stop discipline was, indeed, the story of the weekend.  Penn came down in better riding form than he'd yet possessed in the three years I've known him.  Though a total novice to both the course and the very idea of a 24, he was game in both lung and leg. Penn had planned on four laps, but I would bet my truck keys  he had 5 in him--and I'm pretty sure he could have knocked off a sixth.  The difference between the four laps he wanted and the six he could have bagged had nothing to do with training or will.  Penn, quite simply, went to sleep for the night, and the night got really dark and fairly cold.  While I had a few opportunities to slip those extra two laps into his schedule, I don't think I could have gotten him out of his sleeping bag with the help of a chain and some sharp hooks.

This isn't a knock at Penn.  He rode hard, stuck to his plan, and achieved his goals.  But he was also definitely under a siren's spell.  I did the same thing the first time I rode the race solo.  The first time I rode it as a duo, too.  And I did it the second time I was on a team.  And the second time I rode solo.  So did Tando, all those same races.  I'm also pretty sure that the guy in the tent next to our truck did it this year too, based on the sheepish tale I heard him telling a girl the next morning.  This is the most seductive trap in the business.  Seduced or not, Penn ended the day victorious.  He hit his goal square on the nose, ended in good spirits and fine health, and began planning for next year's 5-lap effort.  You cannot do any better than that at your first throwdown.

But Tando did something incredible.  Tando got out of his sleeping bag at some ridiculous hour and headed back onto the course.  Tando kept cranking out laps, racking up klicks across sections of the clock we've never used before.  I kept up my steady trek to and from the coffee truck, kept charging batteries for the headlights, kept refilling bottles.  It paid off, too.  His seventh lap got underway before the sun even came up.  By high noon he had 9 laps on the books--a record that bested his previous efforts by 30%.

I salute both of my rider's efforts and toast their successes.  I thank them, too, for the lesson they taught me. The lesson, which I share here with anyone curious about undertaking a 24, is simple.  No sleeping.  No napping.  No serious resting.  Just keep going.  Dreadful in its implications, its truth is undeniable.  I'm going to spend the next year internalizing that lesson.

And thinking, maybe, about throwing a padlock on the back of that truck when the starting gun fires.