Velivre: A Dog in a Hat

In the spring, a cycling fan’s fancy turns to thoughts of . . . Belgium. That’s right, the land of grey skies, waffles, white beer—and the Spring Classics, the one-day events that mark the start of the European racing season. (Not that I, a mere semi-serious racing fan, actually follow these races, but I have seen enough pictures of the cobbles and mud to get the significance and mystique.)  That makes this the perfect time to read Joe Parkin’s A Dog in a Hat: An American Bike Racer’s Story of Mud, Drugs, Blood, Betrayal, and Beauty in Belgium (2008). It’s an engaging memoir of Parkin’s experiences in the mostly minor leagues of the Euro pro bike racing scene in the late 1980s. The book also has the feel of an exposé at times too, capturing the gritty, behind-the-scenes details of what really went on in the peloton. Parkin’s prose may be more workmanlike than winning, but the fascinating details of his story and the compelling account of his identity crisis won me over in the end.

In 1985, at the age of 18, Parkin set off for Belgium to make a go of professional cycling, Euro style. British riders had been doing this for decades, moving to Flanders so as to immerse themselves in its racing culture. But for an American in the mid 80s, such a move was unusual. This was in the days of Greg Lemond’s rise to the top, and American bike racers were seen by many Euros as curiosities or objects of ridicule. Parkin’s book begins as the story of a naive American, a keen and clean outsider, who innocently assumes that bike racing is mostly about riding hard and working as a team. But thrown into the Belgian fire he quickly learns about team politics, cut throat tactics, spectacular drug use, selfishness, race-buying, and prejudice. 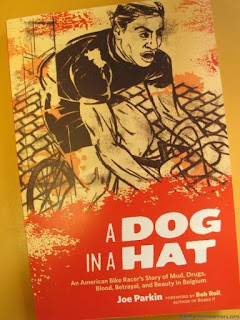 A big part of his initiation involves the uniquely Belgian phenomenon of kermis racing. The kermis, Flemish for “carnival,” is not your usual bike race. As Parkin puts it, “If the grand tours are like classical music, kermis racing is punk rock, Belgian-style.” Imagine carnival rides, salty fried food, and lots of beer. Oh yeah, and a bike race, usually about 150-180 km on a roughly 10 km circuit, and since it’s in Belgium—flat as a waffle. Between June and September in Belgium, there’s a kermis race almost every day, with prize money up for grabs, of course. Participants span the spectrum, from local amateurs to small-time pros to the occasional big boys looking for a tune-up ride. Parkin finds these kermis races a bit overwhelming and baffling at first; the conventional rules of bike racing don’t seem to apply. Part of his initiation involves learning--the hard way--about race selling, that is, the common kermis practice of a competitor “buying” the race from the other members of a breakaway group, offering a certain amount of money to each rider in exchange for allowing that one rider to “win” the race uncontested. Parkin was startled by this at first, but eventually got used to the practice, admitting he, like most pros, made good cash from selling kermis races. He does, however, suggest that the Europeans could have learned a few tricks from WWE wrestling when it came to making a good show of the pre-arranged finish.


Parkin’s acceptance of race selling is only one example of the “altered moral code” that he learned to live with in the Euro pro cycling world. The biggie, of course, and the one that semi-serious bike racing fans like me will find most startling in this book, is the culture of casual drug use. This was the late 1980s, remember, and European doping controls were not taken seriously by anyone. Combine this with the relentless pace of guys trying to make a go of life as pro cyclists or even regular kermis racers and you end up with a culture of rampant amphetamine use and abuse. Although he describes himself as a “conscientious objector and wilful abstainer,” Parkin vividly and candidly conveys this lurid world of syringes, “clear liquids,” pills wrapped in foil, and flasks of mystery fluids, with an impressively detached objectivity, for the most part. Team directors, riders, soigneurs—they were all “handing out drugs like candy,” and that’s just the way it was. While there’s certainly some mocking of the most extreme drug-addled goofs Parkin encountered on the racing circuit, he does not come across as some Yankee goody-two-shoes tsk-tsking his way around Europe. He admits that he tried amphetamines once himself. While the physical effects were “supernatural,” the drugs also made him “stupid” and incapable of thinking tactically. And that was it for Parkin’s druggie experiment.
It would be easy for Parkin to be cynical about all this, but for the most part he’s not. Perhaps this is due to the historical distance here. Looking back twenty years, Parkin can maintain a cynicism-free detachment that someone like Paul Kimmage, whose dark bike-racing memoir/exposé Rough Ride was published in 1990, just couldn’t because it was still all too fresh then.


This historical distance may also have made it easier for Parkin to name names. He tells us frankly which pro cyclists he couldn’t stand and why and which ones he respected and why. There’s a ballsyness to this and it never feels petty. Parkin is just telling it as he sees it. As you would expect with any insider account, Parkin also offers up some amusing anecdotes about big names like Greg Lemond, Bob Roll, Eddy Planckaert, and Kimmage, as well as lots of other riders whose names I didn’t recognize.
I wished at times that Parkin had stepped beyond the tight scope of memoir to offer a little more in the way of reflection on the cycling scene back then. I mean, he’s had over 20 years to think about these events. For instance, I was disappointed in his one-sentence account of the controversial finish of the 1988 Worlds, when Steve Bauer and Belgian Claude Criquielion got tangled up near the finish line. And it’s not just that I’m a Bauer fan. Bauer, like Parkin, had moved to Belgium from North America and became a kind of honorary Belgian too. The messy aftermath of the Worlds crash, which included an ugly lawsuit against Bauer, greatly complicated Bauer’s relationship with his adopted homeland. I figured Parkin is the perfect guy to weigh in on this affair. He was in that race, and he must have had a unique perspective on Bauer’s situation, but he doesn’t get into it. He seems concerned only with his own story. Fair enough. But the best memoirs usually do more.


For me, the most powerful parts of Parkin’s story relate to his coming to terms with shifting identities, both culturally and professionally, during the five years he spent in Belgium. After a few years of racing in Europe he discovered that had become a kind of hybrid: part American/part Belgian. He was immersed in Belgian life, learned to speak Flemish, became close friends with Belgian riders and coaches. But it wasn’t until he went back to the states that he realized how homesick he was for Belgium. And by the end of his time in Europe he is, ironically, more Belgian than some of the Belgians he rides with. As a rider, too, Parkin gradually realizes what he’s good at and how to embrace what he calls “blue-collar racing.”

I think it’s fair to say that Parkin writes like a domestique, and I mean that as a compliment: there’s an admirable, self-deprecating, plainspoken frankness and genuineness about his writing that makes you respect him and this book.
Posted by Jasper Gates at 7:09 AM