Now that spring has finally sprung in these parts, it may seem an odd time to review a book about extreme winter cycling, Jill Homer’s Ghost Trails: Journeys through a Lifetime (2008). But it’s been on my mind a lot since I first read it about a month ago. Haunting me, you might say, mostly in a good way. The central thread of the narrative is Homer’s blow-by-blow account of her participation in the 2008 Iditarod Trail Invitational, a gruelling 350-mile cycling race from Knik, Alaska, to McGrath, Alaska, in harshest winter. But the book is more than mere race reportage. It is also a kind of autobiography, in which Homer contemplates some ghosts from her past, as well as an introduction to the ethos of extreme endurance cycling by a recent convert.

The Iditabike (as it is called for short) is the kind of extreme athletic event that tends to attract a certain clientele: driven, ultra-fit, über-serious, athletic types, hardcore “strongmen,” as Homer calls them (and they are mostly, though not all, men). What makes Homer stand out in this crowd is her claim that she doesn’t fit that profile at all. She is, she tells us, an ordinary Mormon girl from Utah, the "quintessential non-athlete," in fact, who is as surprised as anyone when she discovers that she has a “winterlust for adventure” and becomes pretty much obsessed with taking on the Iditabike. This everywoman quality about Homer gives the book a broader appeal than you might expect from an account of what is not exactly a mainstream event. 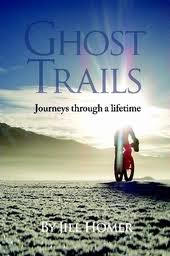 The narrative structure of the book is clever and a bit unusual for a bike book. Mixed in with this story of the race are alternating chapters which offer anecdotes from Homer’s past, from ages 10 to 25 (a few years before the race), in various American locales. Most of these memories are not related to cycling; rather they cover hiking trips, rafting adventures, how she met her boyfriend, Geoff, and how she ended up moving to Alaska with him. (In fact, the story of this relationship is another thread in the narrative, especially the way Geoff nudges Jill out of her comfort zone.) The effect of this narrative structure is kind of like a series of flashbacks mixed into an intense, mostly solitary, cycling survival story of sorts. Think James Franco in 127 Hours but with cold and snow and a fat bike instead of heat and red-rock canyons and arm-sawing.

At first the purpose of some of these flashback chapters eluded me. Other than the fact that most of the memories involve experiences in the wild, many of these stories feel detached from the central narrative thread. But eventually some connecting patterns emerge. In several of the stories Homer ends up separated from a group, or lost, or without food , or unable to find the trail, or in some kind of dangerous situation, and she has to navigate through the initial dread that comes with such a sensation.  So, in a sense, I suppose, these earlier experiences have helped prepare Homer for the challenges of the Iditabike, where one’s ability to handle physical danger and mental strain alone in the wild could be  the difference between finishing, not finishing, and even freezing to death. Also, Homer’s narrative shifting back and forth from past to present is, I think, realistic. On a long bike ride of any kind, a cyclist finds herself “forever drifting between memories and the moment,” as Homer puts it.

Now, this kind of ultra-endurance cycling is not my particular bag. It exists well outside the realm of semi-serious cycling and what I would consider enjoyable activity. Here are just a few of the experiences Homer describes: quite literally freezing her ass off (as in, wondering if her bum is frostbitten); riding with a soaker in 20 degree F; falling asleep at the wheel, er, handlebars and waking up in the snow; bonking out so badly that she ends up digging a hole in the snow, crawling into her sleeping bag, and hunkering down for the night; and, of course, walking with her bike, sometimes for hours at a go. For a race, there’s an awful lot of walking. She is often cold, sometimes cold and wet, occasionally distraught, delirious, and in tears. What fun.

But while I wasn’t tempted to run out and try the Iditabike, I was intrigued by Homer’s account of the race and why she finds it compelling. It feels honest. Despite all the discomfort and despair, Homer wants to push herself, to see how independent, how self-sufficient, how tough she can really be. This I get—even if I don’t want to do it myself. Plus, she describes certain pleasures, small moments of ecstasy and kindness in the race (night skies, volunteer-made flapjacks) amidst all the suffering. And these moments—probably because they are a counterpoint to such misery—are understandably exquisite.

The thing I found most striking about Homer’s account is how often she mentioned the feeling of stark, utter loneliness on the race trail. Not only are the conditions incredibly challenging, but such is the nature of the race course and the range of abilities of participants, that cyclists can get stretched out along the course and can sometimes go for over 24 hours without seeing another soul en route.  Ghostly tire tracks and footprints indicate the recent presence of other humans but other than that, participants are mostly on their own. Such solitude combined with extreme conditions can make for a harrowing experience. By the end, Homer explains, she was so worn out physically and psychologically, that, as she says, “I was little more than a ghost myself.”

Such an experience can’t help but be transformative. By the end, Homer is no longer the ordinary non-athlete she once was, and when she considers the various ghost trails laid out ahead of her, you get the sense that she has become stronger, more independent and resilient than she ever knew was possible. The book ends with a profession of love for her boyfriend. But it feels a bit forced. He’s done such a good job of nudging Homer into self-sufficiency, you have to wonder if she even needs him anymore.

Back at the beginning I mentioned how Ghost Trails had stayed with me long after I turned the final page. The reason, I think, is that recently I’ve been trying to understand the appeal of both fat bike riding (Val and Penn each have one now and I can sense the peer pressure piling up) and endurance cycling (which Val, especially, is fond of). Homer’s book didn’t convert me to either, but it may have at opened up a few new ghostly trails of my own that I may one day venture down.
Posted by Jasper Gates at 10:17 PM