I know that the Giro d’Italia is a big deal in bike racing circles—with its long, storied past, it is, in the view of many, second only to the Tour de France in terms of prestige. But to be honest, I’ve never paid much attention to the Giro. I know the leader wears a pink jersey, that there are Alps and Dolomites involved, and that Italian roadside fans are even kookier than French ones.  Beyond that, I admit the details of the race remain somewhat vague to me.  Every May I seem to forget that the Giro is even taking place at all, so preoccupied am I by all the outdoor activities we can finally pursue again around here, such as baseball, gardening, and, of course, cycling.


Until this year, that is. The impressive performance of Canadian cyclist Ryder Hesjedal in recent weeks has got me paying attention to the Giro in a way that I never have before. I’ve taken to following the stage results daily on the internet, reading up on whatever I can find about the race, and even watching a bit on tv and online when I can. That’s Tour-de-France-level of fandom for me, usually reserved for July bike races. 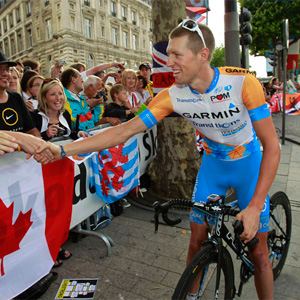 Not since the days of Steve Bauer in the 1980s have Canuck fans of professional men’s road cycling had someone this good to cheer for in a grand tour. For those of you not familiar with RH, I can tell you that he has been a quietly rising star since 2009, when he won a stage in the Vuelta a Espana. In 2010, he finished seventh overall in the Tour de France. In the 2011 Tour, he finished well back in the GC but was a factor in several stages in the final week of the race. If you’re interested in reading more about Hesjedal’s story, I recommend Richard Poplak’s fine piece on him in The Walrus from last summer.

Currently, Ryder is sitting second in the Giro GC and has worn the maglia rosa a couple of times, though not at the moment. Last week, one of the stories I noticed in the cycling cybersphere had to do with how the Italian press was not taking Hesjedal seriously as a contender for the GC. This, of course, makes his run for the pink an even better story: underdog Canadian rider doesn’t get the respect he deserves.  I suspect the actual GC contenders—Basso and Scarponi et al—took notice of Hesjedal long ago, even if the Italian press has just clued in in recent days.

But for me the best part of all this is simply the way Hesjedal races his bicycle.  He is an aggressive, smart rider who is a treat to watch. He takes chances, seizes opportunities.  Skeptics say he doesn’t have a very strong team behind him at the Giro. The way he rides, that may not matter.

So is a pink maple leaf really a possibility? You never know what will happen in the final days, but I am fairly certain of this:  it will be fun watching Ryder try to get the maglia rosa back.

And, thanks to RH, I can add one more item to my list of things to look forward to every May.