They passed on peacefully, with dignity, of natural causes, on May 4, 2012. Jasper laid them to rest gently in the garbage can in the alley behind his home. “It was time,” he commented quietly as he fastened the lid on the can and, head bowed, turned back toward his house. “They were done.”


Jasper’s tights were manufactured in Taiwan in 1989, and were purchased from the MEC in Calgary that same year. The fabric was a then-state-of-the-art pseudo-spandex. The tights cost $29. At first, they saw limited duty: occasional hiking trips, crisp fall runs, the odd cross-country ski. But once they got to know each other, Jasper and the tights were almost inseparable. The month of May, 1991, while tree-planting near Kapuskasing, Ontario, Jasper wore them every day, even in his sleeping bag. 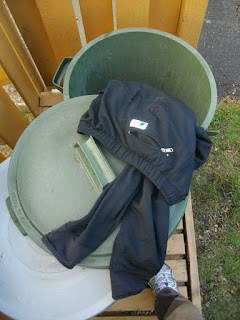 But, of course, their best times together were on board Jasper’s bicycles. Many a cool spring or fall morning, those black tights worked their thermal magic, somehow always keeping Jasper’s legs and nether regions just the right temperature.

Jasper always claimed that the tights had a certain je ne sais quoi about them. “Well, for one thing, I don’t remember ever washing them,” he explained. “I mean, I must have, at least a few times over the years, but, honestly, I don’t remember doing it. Yet they always seemed fresh, ready to roll. It’s as if they somehow cleaned themselves. Friction, maybe? Whatever. They were special; that’s all I know.”

The man-pants bond was unusually intense, explained Jasper’s wife, Victoria Day. “Honestly, I can’t say I’m too sad to see them go. Jasper’s had those tights for longer than he’s known me, and I’ve always been a bit jealous of this thing they had together.”

The tights survived a scare in 2002 when an errant campfire spark singed a dime-sized hole in the left buttock. The tights not only beat the odds that time, they seemed to gain a second wind from the brush with mortality. 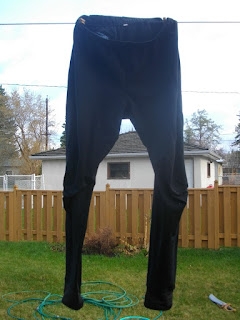 In recent years, however, Jasper’s tights had begun to show their years. The once form-fitting material lost much of its snap; the waist band elasticity was starting to go; the butt area sagged badly. There was nothing aerodynamic about them.  “Those things look more like pajamas,” Jasper’s friend Val remarked recently. “Not the cool kind. The crappy kind that POW’s are issued.”

Still, the tights continued to perform, more or less, right up to the end. “Original ankle zippers and waist tie. Fully functioning back pocket. Soft, flocky lining--after 23 years no less!” Jasper reminisced. “They just don’t make ‘em like that anymore.”

By the last days, the very name tights had begun to seem not quite apt, ironic even, as if the word had quotation marks around it. Even Jasper had taken to thinking of them more as cycling trousers or something akin to those stylish tapered, semi-tight pants the crew of Star Trek: Next Generation wore.

“Sure, it’s a sad day,” Jasper admitted. “But those babies had a good run. Today we celebrate.”

Jasper’s tights were predeceased by a matching zip-top that perished in a freak clothes dryer accident in 1999.

In lieu of flowers or donations, friends, well-wishers, and loved ones are invited to leave a comment below in remembrance of Jasper’s “tights.”
Posted by Jasper Gates at 1:41 PM