Year of the Fatbike

A few weeks ago, Penn asked that I talk a little more about the Pugsley.  I'm flattered, of course, that he would turn to me for the backstory on this bike, but I'm not sure that there's much I can contribute to the field.  2011/12 has been the year of the fatbike, with both Salsa and Surly bringing a range of models to the mainstream.  Bikes which once were available in small numbers through niche specialists like 9:zero:7 or Speedway are now, nominally, available through any local shop with a QBP account.  But despite this exponential increase in the number of fatbikes available in the world, its been almost impossible to buy one this year.  This boom in the popularity of fatbikes have been accompanied by a boom in writing about them: from Vik over at the Lazy Rando to the excellent Joe Cruz to our own pal Jasper.  If there's anything you want to know about fatbikes, I suspect it's already out there in some corner of the internet.  Yet I still need a post this week, so I'll stir some more words into the mix. 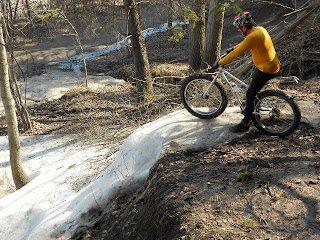 Rather than getting into the history of the machine, what you can or can't do with it, or whether a 135mm or 170mm rear-end is the right choice for a fatbike, I want to think about why this has (finally?) been their year.  The obvious answer is that even the somewhat granola sport of mountain biking is a consumerist fantasy world and that the relentless search for the next new thing would eventually work its way into the frozen corner of the world inhabited by fatbikes.  Marketers have split mountain biking into xc, trail, all-mountain, downhill, and freeride already, pimping each "discipline" and its specialized equipment in turn.  Cyclocross and singlespeed have both had their moment.  Fatbikes are clearly the flavor of the moment, and their relative rarity ensures that parking one in your garage will give you something your riding buddies don't have.  The unique desirability of the fatbike, after all, is much easier to explain than the move to a 2x10 setup. 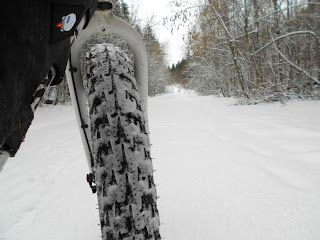 But maybe the appeal of the fatbike is more organic.  Maybe all of the riders who find themselves snowed in every year, all of the riders surrounded by muddy, swampy half-submerged trails, all the folks who live near wide, empty, expansive beaches suddenly saw a way to get out of the house, saw new places to pedal, so new routes to old destinations.  The fatbike, more than other gear purchases you might make, really does make possible things that without it are, at best, supremely difficult.  For most people, it makes possible what before seemed (and probably was) impossible.  If this decade is suddenly the decade of the fatbike, perhaps the explanation lies with the sudden realization by riders everywhere that they might succeed in wresting access to untold new areas of riding from the isolated experiences of a few wild folks in Alaska.

Or maybe there is something to that whole consumerist fantasy I mentioned earlier.  But perhaps the sudden explosion of interest in the fatbike is an almost reflexive response against that consumerism.  One almost needs an engineering degree to make a responsible choice of rear-suspension systems.  A high-end suspension fork costs hundreds upon hundreds of dollars and requires an overhaul every 150 hours or so of riding--for most people this means a trip to the shop and a few days off the bike.  You can spend a lot of money chasing carbon everything, shaving grams, and replacing your 10-speed chains.  But a fatbike, and a Pugsley in particular, is a ticket out of that particular race.

It's around 40 pounds; live with it.  9 speeds, if that many, work just fine for snow cruising.  There's really only one option in suspension forks if you insist on going that route.  Up until this year, you only had two tires to choose from.  For most of its history, you could drop $1500 on a Pugsley and have a bike that was pretty much close enough to the state of the art.  I'd like to call it elegant, but the phrase brutal simplicity might better describe the machine.  All to the same end, though.  I can't help but wonder if the fatbike trend reveals that the fatbike is not an exotic, fetishistic contraption, but all and exactly the bicycle most riders need. 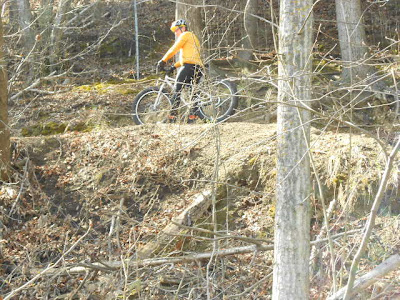