I want a mini-bugle for Christmas. Not an iPhone or a Garmin or some other technological marvel.  I just want a small cycling bugle like the one this Victorian dude has. 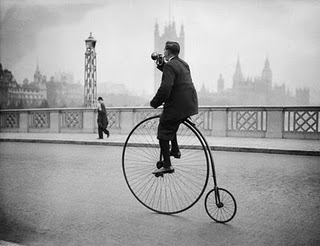 A few weeks back, Val included this image in his post about cassettes and I found myself intrigued by the object in the dude’s hand, for it did indeed look like a tiny bugle, of the kind you see in old paintings of fox hunting or the cavalry.  Then just the other day, while browsing through David Herlihy’s excellent Bicycle: A History (my go-to source on cycling history), I happened across a reference to cycling bugles. Turns out that in club rides in the 1870s & 80s, the club captain carried a bugle to call out signals to the other riders: to speed up, slow down, dismount, ride single or double file, that sort of thing.

Back in the day, it seems, a bugle was an essential accessory for the social cyclist. According to Charles Eadward Pratt’s The American Bicycler: A Manual for the Observer, the Learner, and the Expert (1879), “At all club meets, the bugle will sound for the start of the assembly” and “reveille is to be sounded [on the bugle] first thing in the morning when the club is on tour.”

The word bugle, I was delighted to learn, comes from the Latin buculus, meaning castrated bull, the horn of which was used to create the earliest proto-bugles. This derivation makes perfect sense, for when I imagine the soundtrack of a castration, it’s all mournful bugles.  Since at least the eighteenth century, bugles have been used as a military signal device, and they are often associated with the cavalry. Bugle calls were used to direct the horse troops to Rise Up, Lay Down, Cease Fire, or Curl Up in the Fetal Position. Since the bicycle was seen by many in late nineteenth century as a kind of mechanically improved, steel steed, it makes sense that the bugle would carry over from horse culture to cycle culture. 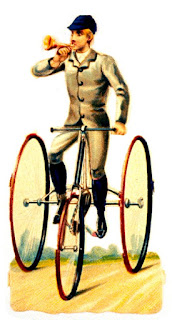 Interestingly, I discovered that when one attempts a Google search on “cycling bugle,” one gets a gazillion hits, but only because the too-clever search engine automatically redirects to “cycling bulge,” and a plethora of disturbing images like this: 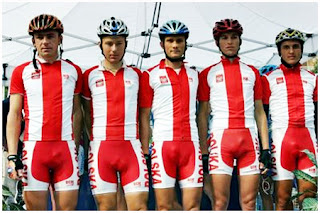 This only makes me want a cycling bugle (if not a cycling bulge) even more. In fact, this curious anagrammatical accident raises the possibility of a cycling bulge created by a cycling bugle. (Hey, is that a bugle in your shorts, or are you just happy to be ingesting enormous quantities of testosterone, Floyd?)

I’m thinking bicycle bugles could well be the next vintage bike fad accessory on the hipster cycling scene, coming soon to the streets of Brooklyn. They’re fun, fancy, and old timey. I can even picture the ad on the Rivendell Bicycle Works website: “The Shropshire Bugle: made of handcrafted fillet-brazed brass-CrMo, coated with electroless nickel finish. Comes in dull-bright lustrous satin. This is the last bugle you’ll ever need to buy. $59.99.”

As with a lot of retro gear (and even fixies, to some extent), some people will take to the bugle because it hearkens back to a time when cycling, and cycling gear, seemed less complicated than it does today. The notion of blowing on a bugle as a means of basic communication with a large group of cyclists has a certain quaint appeal. In fact, wouldn’t bugles make charming substitutes for race radios in the Tour de France?

What exactly would I do with a cycling bugle, you ask? I can think of a countless applications. First thing, I’d strap it onto my Camelbak harness, so I could easily raise the bugle to my lips with a flick of the wrist. Then, as in days of yore, I’d begin each ride with hearty toot; then, with a buzz of my embouchure I’d announce my arrival in every village I pass through; in the countryside, farm animals would raise their heads at the sound of my song, wondering where that castrated-cow noise was coming from; heck, I could toot Jingle Bells whenever the spirit moved me.

I think that Santa might just come through and grant my Christmas wish. After all, he is a bugle man himself. 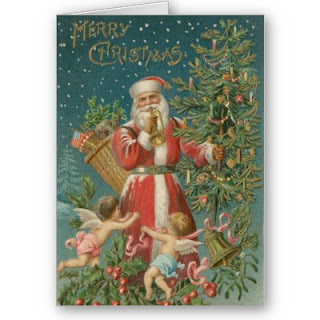