In the farmland south of the city where I live there’s a particular T-intersection I’ve always loved. It’s the meeting point of two quiet, poorly-paved country roads, the kind of roads that don’t really go anywhere and are only used by the handful of people who live on acreages and farms along those roads. There’s a small U-pick farm on one side, a couple of modest country homes along the other, and a long straight row of aspens planted close beside the one road for about two kilometres, the kind of stately tree row I associate more with the roads of France than Alberta. It’s a sleepy, pretty corner atop a gentle rise, and it feels like it could be a million miles away from the city, even though it’s not (and will, no doubt, be swallowed up one day by the tentacles of urban sprawl).

At the south end of the T, the north-south road turns into a gravel road that continues south through rolling farmland. For years—at least until this past year—every time I turned that corner following the pavement, I would gaze down that gravel road and wonder, where does that go? But because I ride a road bike with skinny tires, it never really occurred to me to turn down that gravel road and find out for myself. Surely my skinnies would get bogged down in the soft gravel; or I’d get a flat, or somehow mess up my bike. I’m not exactly sure why gravel riding hadn’t occurred to me, but it hadn’t. Cycling on gravel was just something you didn’t do with a road bike, at least not by choice.

But then this past spring, at the suggestion of my new friend Val, I decided to give gravel grinding a try. Val, I discovered, had been riding his road bikes on gravel roads for years. Turns out that in the US Midwest, where Val grew up, gravel grinding is kind of a thing; check out the web, as I did, and you’ll find established gravel rides and gravel groups in places like Iowa, Kansas, and Missouri. All you need, Val explained, is wider tires to provide more traction in the soft stuff, maybe some fenders—and a sense of adventure.

My maiden voyage on gravel took place one sunny day last May, when I set off with the other two Musetteers to explore the gravel back roads west and north of Elk Island National Park.  I took my touring bike, which was already set up with 35mm tires and new fenders, and prepared myself for some bumpy slogging.  But here’s the surprising thing about gravel grinding: it’s not that much slower than road riding, and not as uncomfortable as you might expect. We clipped along at a respectable pace, riding three abreast down the middle of the road, and almost immediately, I got it—the appeal of gravel riding was so simple, so obvious. 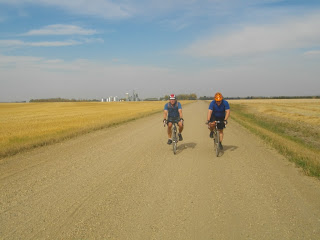 For starters, there’s no traffic. It’s obvious but true: cycling is almost always better when you don’t have to share the road with cars and trucks.  Too often the best paved roads, the ones that are smoothest for road cycling, are also the ones with a lot of vehicle traffic. Roadies like me are always on the lookout for those hidden gem routes, paved roads with little traffic. Gravel riding is a fabulous ways to lose the cars and trucks. You can literally ride down the middle of a gravel road (which is where the smoothest track is often found) without worrying about getting hit by a car (in fact, you don’t see many cars period—it’s more truck and tractor territory). On a typical 3-hour gravel grind around here, we see maybe a half dozen trucks or farm machines on the road, and they are generally so surprised to see us that they slow right down so as to get a good gawk, providing lots of time to get over to the edge of the road.

The traffic-free quiet of gravel riding is sweet, but the best part for me, I think, is the sense of liberation, the opening up of the road map I’ve experienced since May. All those thin grey lines on the road atlas, which denote gravel roads, used to be verboten when planning cycling routes. But when you embrace the gravel, the possibilities unfurl and you realize you can go all kinds of places that road cyclists generally just don’t go.

There are some potential down sides to gravel grinding, or rather some adjustments I’ve needed to make. Gravel riding requires greater attention to the road, no question. There’s a constant navigational process, looking for the best route –the hardest, smoothest part of the gravel surface. This takes some getting used to, and if the gravel is mushy or washboardy, you can find yourself looking down almost all the time. Vibration can also be an issue if the gravel is especially bumpy. Your arms can get a serious case of jackhammeritis. (We tend to mix in some pavement here and there to give the arms a little rest.) Plus, occasionally, the gravel is incredibly soft and quicksandy to the extent that you feel like you could get off your damn bike and walk faster. But these conditions usually only last until the next intersection, where you can just turn and try a different road. And finally, grinding can be plain old dirty. Dust, mud—these are part of the deal.

Still, I am an unabashed convert. I think that gravel grinding is growing because it offers a trade-off that some cyclists are all too happy to make: sacrifice some smoothness, a bit of speed (though not as much as you might think) in exchange for quiet, no traffic, a lot of dust, and near endless possibilities of roads to explore.

As for that intersection south of the city, I no longer wonder about that gravel road going south. I’ve taken it many times now. It goes for about 3 miles, rolling up and down along the top edge of the North Saskatchewan River valley before hooking up with another paved road. It’s lovely. And I’ve never seen a vehicle on it, let alone another cyclist.
Now, each time my wheels leave the pavement and cross that threshold onto the small rocks and dirt, I feel a small thrill, leaving the black lines, going grey, going gravel. Bring on the dust!