I’m nine years old. I told my Dad that I was going to ask Santa for a kickstand for my bike. My Dad got this funny look on his face and said, “Trust me, kickstands are gay.” Is that true? Are kickstands really gay?

Dear WAG,
Yes, indeed, your father is quite correct. Kickstands on bicycles are most certainly gay. Remarkably so. As gay as rainbows, I’d venture. In fact, the bicycle kickstand may well be the merriest, jolliest, bicycle accoutrement ever invented.

Personally, I love my trusty kickstand; I find it practical and manly, as well as lively and carefree. It conveys a certain brio, a hint of panache. I highly recommend this cheerful accessory on almost every cyclist’s ride. 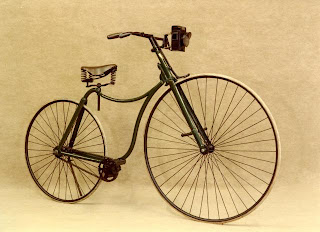 The extreme gayness of kickstands has long been recognized. In fact, kickstands were invented in France in the Gay Nineties (that’s the 1890s), when cyclists realized there were no trees left in Europe to lean their bicycles against. Quickly, kickstands became a common sight on the boulevards and cafés of Paris. It became fashionable for dandies to make use of this ingenious invention when parking their safety bicycles about town. Instead of leaning a bicycle precariously against the bath house wall, one could simply tap the spring-loaded device with one’s foot and voila! A free-standing velocipede! In London, around this time, Oscar Wilde was notorious for his grand and intricate art nouveau kickstand (reputedly designed by Aubrey Beardsley), which he often adorned with a single pink carnation.

Much later in the 1970s, in San Francisco, kickstands experienced something of a renaissance amongst urban cyclists. It wasn’t unusual to see riders as diverse as police officers, construction workers, sailors, and even cowboys and aboriginal people sporting kickstands on their bicycles parked outside the YMCA. 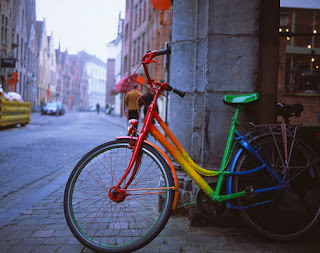 Some kickstands are gayer than others, to be sure. The two most common models are the feminine centre stand, with its pair of symmetrical legs that flip straight down and lift the rear wheel right off the ground (common in the Low Countries, Netherlands and Belgium, where absolute erectness is valued), and the masculine single-leg side stand. I have always been partial to a sturdy side stand, with its single elegant leg, extended at the jauntiest of angles. Indeed, I’m so fond of my masculine kickstand that I find myself admiring it all the time. Sometimes, when no one is looking, it feels satisfying to give it a good flick, just for fun. 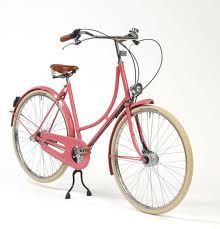 Incredibly, WAG, some uncultured, mean-spirited and overly serious cyclists have been known to mock and even malign the kickstand, usually implying that it is a silly bicycle bauble, which only clutters and weighs down one’s ride and is fit only for children’s and ladies’ bicycles. These kickstand naysayers, however, with their ultra-light machines leaning haphazardly against a garbage can or lying all vulnerable and pathetic on the grass, miss the point. A kickstand is a practical and beautiful accent, like a stylish watch on the wrist of a beautiful woman, or a perfectly placed comma in a well-formed sentence. I can only surmise that these kickstand poo-poo-ers are secretly envious of those of us endowed with a reliable stiff leg.

Your paterfamilias, who sounds like a wise and liberal-minded man, is right to point out the absolute and wonderful gayness of kickstands. And don’t worry—Santa Claus is one of the gayest, jolliest fellows I know, and I’m sure he’s packing his sleigh with an array of fetching kickstands for all the boys and girls. Make the Yuletide—and your kickstand—gay, and have yourself a merry little Christmas.