In the spirit of Christmas consumption, I encourage you to buy a bike-book this festive season, either for yourself or a cycling friend or loved one. And while there are dozens of great titles out there to choose from, I’m going to recommend one in particular as a guaranteed hit with any cycling aficionado. Don’t be fooled by the slim profile of Tim Krabbé’s novella The Rider, originally published in Dutch in 1978, and translated into English by Sam Garrett in 2002,; this book has the heart of a champion.


Krabbé is well known in the Netherlands for his novels, and some North Americans may have encountered his work through films based on his fiction. The terrific, creepy Dutch movie The Vanishing (and a not-so-terrific American version of the same name) is based on one of his novels.  But Krabbé has long been an avid and competitive cyclist too (though he didn’t start racing until he was 30), and The Rider is a semi-autobiographical account of a single bicycle race, “the sweetest, toughest race of the season,” the 137-km Tour de Mont Aigoual in the Cévennes region of central France in 1977. 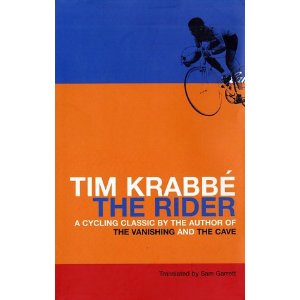 The narrative begins about an hour before the race start and ends about an hour after the narrator (“Tim Krabbé”)   crosses the line. The bulk of the book consists of Krabbe’s on-the-fly, moment-by-moment commentary, describing the race from the rider’s point of view, kilometer by kilometer. Interspersed are memories of the narrator’s cycling “career,” anecdotes from pro bicycle racing history, observations along the race route, and reflections on the science and art of bicycle racing. At 148 pages, it clips along at about a page-per-kilometer pace. Reading it has a kind of real-time effect; the race takes just over four hours, and the book can easily be read in that amount of time.

One of the things I love about the book is the way it captures the sense of pace. There’s a steady rhythm to Krabbé’s prose, a driving quality, created by a steady pumping out of clauses and sentences that captures a definite tempo that will be familiar to any semi-serious rider. It’s 100 rpm prose:

Cadence. Half a kilometer to go [on a climb]. Before me my beautiful wrists, a hundred kilometers of race, and far, far away a six-man break. How many of us are still here? Don’t look around. How fast are we going, anyway? I should count the turns of my pedal, by the minute, figure out my gearing. How much is forty-three divided by nineteen?

Along with this pace, though, comes a certain precariousness; everything happens so fast, all it takes is a puncture, a slip around the next corner, the next page, for it all to come crashing down. Krabbé’s writing gives new meaning to the term present tense.

Like any good story, The Rider features a cast of characters, fellow competitors, some allies, some rivals, many of whom race against each other every weekend. The narrator knows their strengths and weaknesses (Kléber is the best climber, Lebusque can’t sprint), and they all know his (strong sprinter but terrible downhiller). We see the conversations and non-conversations between riders, the camaraderie, and the mind games. Krabbé captures the paradox of bicycle racing: it is a devilish combination of sacrifice and selfishness. To have any chance of winning, a rider must depend upon others for help; but at decisive moments, a ruthless selfishness is essential.

But the narrator is what makes the book. In addition to being a cyclist, Krabbé is also a competitive chess player, at one time highly ranked in the Netherlands, and his strategic chess-mind is evident through the race, anticipating moves, counter moves, thinking steps down the road. In fact there’s something curiously mathematical about Krabbé’s thinking; he seems to see the world and think the race through numbers. And not just the kilometer markings that punctuate the narrative, but also the recurrent mentions of gear ratios (“Forty-three seventeen,” he’ll announce out of the blue—the ratio of teeth on the front and back rings of his bike), and the way he numbers every race he’s ever been in (the current one is number 309 of his career). Numbers drive him. At one point he recalls playing with a typewriter as a child: “I typed all the numbers. I started with one and went up from there.”

For me, part of the appeal of the narrator is his age. He’s in his mid-30’s, having started bike racing “15 years too late,” but highly competitive. We’re told that he regularly finishes in the top 5 and even wins his share of these races, despite the fact that he’s competing against some much younger men. Still, he knows that he’ll never be riding the Tour de France.

Instead, the narrator is driven by a passion for cycling and some deep, primal need to push himself, to test himself against others.  I think a lot of weekend-warrior cyclists, of any age, can, at some level, relate to this competitive spirit.

Now hold on. I know what you’re thinking. But Jasper, isn’t this all a bit serious for you? Racing? Is that not an affront to the very ethos of semi-serious cycling? Not at all. True, I don’t race, but I do enjoy watching others race. The drama, the intrigue, the spectacle, the suffering—it’s riveting.

Yet as much as I enjoy watching the Tour and following the eccentric, insightful commentary of Phil and Paul, the point of view is always outside the actual participants. We can only ever guess what’s going on inside the mind of the Schlecks and Contador as they duke it out. Krabbé, however, offers the rarest perspective on a bicycle race: from the rider as he’s actually in it, riding, pedal stroke by pedal stroke. And his rendering is utterly believable, as any competitive athlete will recognize. Krabbé tells it true:

On a bike your consciousness is small. The harder you work, the smaller it gets. Every thought that arises is immediately and utterly true, every unexpected event is something you’d known all along but had only forgotten for a moment. A pounding riff from a song, a bit of long division that starts over and over, a magnified anger at someone, is enough to fill your thoughts.

During the race, what goes around in the rider’s mind is a monolithic ball bearing, so smooth, so uniform, that you can’t even see it spin. Its almost perfect lack of surface structure ensures that it strikes nothing that might end up in the white circulation of thought.

The tempting cliché, of course, is to see the bicycle race as metaphor for life—the journey through all that pain and pleasure, suffering and joy, chance and choice—but that’s too pat. Krabbé’s view is both darker and more perversely heroic: the rider as existential hero, who insists, “I’m only giving it everything I’ve got because no one says I have to.”