Why You Won't Miss A Cassette

The project of Monsieur Reveaux’s current dream-bike draws a lot of focus around here.  I will steal none of his poetic thunder, but I will be chiming in from time to time to pontificate on the technical side of the endeavor.  One of the first specifications for this project was fat tires, but close on the heels of that decision came the suggestion of an internally geared hub.


Internal gearing has a lot to recommend it for this project.  Because the bike will mostly be used on dusty, gritty, muddy backroads, avoiding derailleurs and side-loading the chain will make a real contribution to chain life and shifting precision.  The bike will live in a small, fashionable apartment with little room for bike work, so not having to tweak derailleurs or worry about banging them against an end table, is a perk. Shifting while not moving is always cool.  Finally, M. Reveaux has a terrible affinity for cross-chaining his bicycle, and the linear shifting of the IGH will put a merciful end to that.

The debate then shifted to which IGH was the right one for the project, and that answer was self-evident:  the Rohloff. But the Rohloff would have consumed the budget for the whole project in itself, so we nixed it in favor of something from Shimano’s Alfine series: specifically, the 8 or the 11.  The 8 has a lot to recommend it—cost, track record, lower gearing—but M. Reveaux had some reservations about dropping from his twenty-speed Cervelo to only eight gear combos.  This blog post, then, attempts to address those concerns. 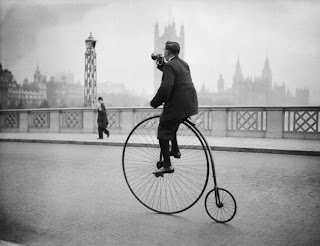 The first thing we should do is to define our terms.  What we call a “speed” is, more properly, a gear combination, say 50x12.  (This means a 50-tooth chainring in front and a 12-tooth cog in back. Also, the calculations which follow figure a 700x25c tire for the twenty-speed and a 700x38 for the IGH.)  There are many ways to talk these combinations, but the traditional term is “gear-inches.”  It’s a delightfully opaque term, and it works a secret handshake between cyclists who have achieved at least a semi-serious level of commitment to the sport.  A 50x12 combo produces 109.9 gear inches.  Inches of what?  Well, what this means is that when you pedal your bike in the 50x12 combination, you are pedaling the equivalent gearing of a penny-farthing with a front wheel 109.9 inches in diameter.

This provides a useful shorthand for comparing the various combos your bike can produce.   In layman’s terms, the higher the number, the “harder” it the gear is to push, but the faster you go.  The lower the number, the easier it is to spin, and thus the steeper the hill you can climb, but the sooner you top out on your velocity.    So, to turn our attention to the concrete, M. Reveaux normally rides a 50x34 compact crank, and a 12-27 wide-range cassette.  Thanks to Sheldon Brown’s gear calculator, we see that M. Reveaux’s gearing looks like this:

Geared with a conservative 44x20 combo, the Alfine 8 produces the following gear range:

What you might notice about the Alfine’s range, now that you speak gear inches, is that the jumps between gears now run up to 13 inches apart.  This is bad/annoying if you’re a serious racer or have specific physical needs that require you cadence to fall within a precise, highly tuned range.  That’s what the move from to to 11 speed cassettes has been about, by the way.  Not improving the gear range, but shrinking the gap between individual gear combos.  This matters when you’re on the bike six hours a day and need to squeeze every micron of efficiency from your body.  The rest of us can pedal a little faster or a little slower and not worry about it after a few pedal strokes. For some, that’s a small entry price for the advantages an IGH gives.

Why not the Alfine 11?  Look at the chart the same 44x20 combo used above produces:

Note that there’s nothing on the lower end to help M. Reveaux up a mountain there.  What he would get is the ability to go faster than he has any interest in pedaling on 90% of his rides.   For that he would pay more than double the price of the 8 and be among the first to find out if the 11 is as durable as years of hard use have proven the 8 to be. . . .
Posted by Val Garou at 7:44 PM