Winter is the perfect time to read about cycling. And although I heartily condone reading cycling blogs, the best of which can be diverting and enlightening, at this time of year I also like to read cycling books. Perhaps there’s something about this longer form of writing that enables it to sort of stand in for the longer bike rides I miss at this time of year. My winter spin class is short, concentrated, intense; it provides a somewhat satisfying workout, sure, but it’s not as enjoyable or rewarding or immersive an experience as going for an actual long bike ride. Similarly, blogs tend to offer tasty morsels, the salty snacks of the literary world, while books offer a more substantial and filling literary feast.

Therefore, I propose an occasional series of personal, highly subjective, thoroughly biased reviews of some of my fave and/or notable cycling-related books, posted under this heading of Vélivre, which is a word I just made up combining the French vélo and livre or “bikebook,” and is meant to echo the name of the popular bike-share program in Paris, velib’ (vélo + liberté).

My tastes in cycling books are diverse: biographies, memoirs, fiction, cycle-travel narratives—anything at least mildly literary gets a shot. On my shelf right now, I see a small stack of cycling books I’m keen to take up in the coming months: the Crane cousins’ Journey to the Centre of the Earth (1987), Paul Kimmage’s Rough Ride (1990), and David Byrne’s Bicycle Diaries (2010).

I didn’t start actively reading cycling books until about 6 years ago, when it occurred to me that there was an obvious way to connect my professional interest in literature (I teach English for a living) with my personal enthusiasm for cycling. I began exploring literature written about cycling, and one of the useful resources I stumbled across was this list put together by a bike shop in Palo Alto, California:
http://www.paloaltobicycles.com/resources/top-50-books/

I dove in, and started working my way through the list, focusing especially on the cycle-travel narratives, since I already was a fan of literary travel writing. It was via this list that I first encountered the names of some of the big names in cycle-travel writing, such as Dervla Murphy and Joseph and Elizabeth Robins Pennell; as well as titles I now see as classics: Eric Newby’s Round Ireland in Low Gear (1988) and Josie Dew’s The Wind in My Wheels (1992), for instance. I recognize now, having surveyed a range of cycling literature, just how quirky this top-50 list is, and as is often the case with such lists, I have my beefs concerning inclusions and omissions. Still it’s a great jumping off point.

As I read more and more about cycling, I began to realize that the connection between cycling and literature is a rich one that goes back to almost the beginnings of the velocipede. As early as the 1880s, a market was emerging for cycle literature, both in the periodical press and the book publishing markets in Britain and the United States. In fact, there’s an enormous body of cycling literature from the late nineteenth century, ranging from how-to guides to travel narratives to technical manuals to poetry to essays and fiction. Riders, it seemed, developed an appetite for reading about riding. 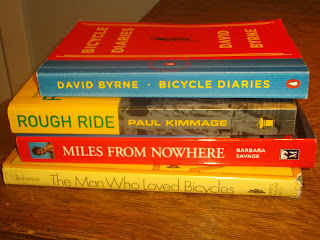 Plus there was for some an assumption that cycling was a fundamentally literary activity. In Some Literary Landmarks for Pilgrims on Wheels (1901), F.W. Bockett (love that name) waxes on about how cycling is the “Gentle Art” (overtaking angling!) which brings “nature and man together” in a way that only poetry and painting used to. Cycling, he argues, “is a companion to the solitary . . . an aid to reflection; it gives inspiration to the poet, health and strength to the plain man, vigour to the man of science, and breadth to the philosopher.”

This might explain, in part, one trend that emerged in these early days of wheeling: the cycling literary pilgrimage. This was a sub-sub-genre of the cycling travel narrative that involved a cycle trip either in the footsteps of a famous writer (for instance, the Pennells’ A Canterbury Pilgrimage (1885) on the route of Chaucer’s characters) or to the home of famous writers (Bockett visits the stomping grounds of John Milton, Percy Shelley, and Jane Austen, among others). For some reason, cycling was deemed an especially appropriate mode of travel for following in the steps of literary greats.

I’m not sure that cycling is still seen as a particularly literate pastime the way it was a hundred years ago. But there’s still a great deal of cycling literature produced every year and some of it, the best of it (from writers such as Tim Krabbe and Robert Penn) continues that high tradition of cycle writing started by the Pennells, Thomas Stevens, Bockett, and others and taps into those links between the Gentle Arts.

After all, riding is kind of like reading—the words are only a vowel apart. So many of the metaphors we apply to the riding experience—the journey, rhythm, flow, immersion—apply as well to the reading experience. An engagement with a text on our laps is not so different from an engagement with a landscape over the handlebars. In both cases, close observation of details can heighten the experience. And repetition is no hindrance to enjoyment of the experience of both. As Elizabeth Robins Pennell once said, “The world is one great book of beauty and romance; and on your cycle you can gradually master it, chapter by chapter, volume by volume.”
Posted by Jasper Gates at 9:21 PM