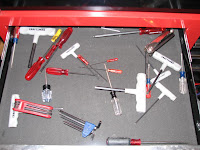 The snow and ice are here, putting an end to the long road rides of cycling season.  I know making a graceful transition to xc-ski or snowshoe season is the normal thing to do here, but I'm mostly a bike guy.  No, the arrival of ice and snow signals the start of another season altogether for me:  wrenching season.  Not wrenching as in its-all-too-terrible-to-be-kept-off-the-roads wrenching, but a season devoted to the turning of actual wrenches.  And every other tool I own.

The upside to being forced to take a few months off the bike is that you can get to work on rehabbing your rides from all of the punishment you dished out over the season.  It's good policy, I think, to tear your main bike down at least once year.  Sure, you should be keeping an eye on it all the time, say the user manuals, but a teardown really lets you inspect a frame for hairline cracks, clean the caked-on petrochemicals from your chainrings, and finally replace those nubbins you've been letting pass for brake pads.  But that's all stuff you should be doing anyway.  The teardown lets you repack or replace the bearings in your hubs, make sure your bottom bracket hasn't turned itself into a garbage disposal, and amaze yourself with the difference new cables and housing make to your shifting.  While you'll hit the Spring roads with withered legs, you'll do it astride an almost-new bicycle.

That's the ideal, anyway.  When I lived in the bicycling mecca of Tucson, AZ, no winter arrived to force you from the saddle.  Sure, riding slowed way down in the summer, but slowed and stopped are two different things.  I rode with ragged holes in my bar tape.  I rode with sadly frayed cables splayed out from pinch bolt.  I rode my bikes ragged.  I didn't have time to break a bike down and rebuild it; there was always some ride to tackle.  Something needed to be done.  I ended up buying a second bike with identical geometry to my main ride and an extra set of wheels so that I wouldn't mind putting a machine out of service for some maintenance.  The result, though, was that I just rode everything into the ground, and when it wouldn't go anymore, I swapped to the next machine down the line.  When the last thing broke, I slapped a repair together and got back to pedaling.  The system worked beautifully--I never missed a ride because of a mechanical.

But a lot of rides were dogged by a persistent sense of shame.  My bikes deserved better than 3 year-old cables.  They were always in great working order, but I knew they weren't polished.  The details were never quite right, and they nagged at me.

Well, snow and ice have arrived to spare me that shame.  I have, what, six months, give or take a few weeks, to sweat the small stuff.  I like that.  I like the meditative business of making a thing just so.  I like the look of a machine honed to its finest edge.  There are times when I like turning a wrench more than I like turning a crankarm.  So alright then, winter, time enough for that. 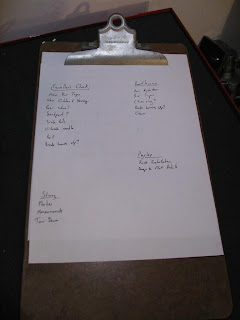