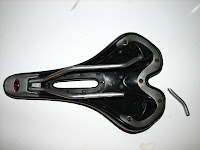 I break shit.  I break a lot of shit.

My dad used to say I needed the same kind of bike that the bears in the circus ride.  I think that's probably true.  I'm not a particularly abusive rider--you can ask Jasper, who was right next to me on a mellow afternoon ride when this saddle busted loose.  I don't race, I don't jump my mountain bikes, I don't case wheels into curbs, I steer around potholes and I keep all my fasteners torqued to spec.  But yeah, I break shit.  Relentlessly.

It's embarassing, too.  Holding up, or worse, ending your buddies' ride because of a mechanical feels like one of the worst things you can do out there. It seems a little like going out to dinner with your pals and, right after putting the order in, shitting your pants.  If you show up without your legs, you can always turn around--and  on the right kind of ride, your friends have the right to drop you if you don't have the manners to take yourself out of the equation.  But a mechanical is a kind of wound, and none of your friends will like leaving you hobbled and helpless on the side of the road.  You have single-handedly screwed up everybody's plans, yet they will feel so badly for you that nothing else can be done but to come to your aid.

What's more, I have it a little worse because I'm known as the tech guy, the mechanic, the gear whore.  If anyone should keep his bikes in running order . . .  And of course I do.  I don't have mechanicals from dry chains or mis-adjusted brake pads.  I break shit. I know most high-end bike companies design their gear around a 160# rider; I have not weighed 160 pounds since high-school.  I ride a lot--some months have seen a century every week.  I ride on terrible excuses for roads, on gravel, on ice, wherever.  I love long climbs, steep climbs--every kind of high-torque torment.  Equipment pays the price.

And then, after that, so does my wallet.