“And so to sleep!  And I dreamed that I rode my bicycle seven times around the moon and climbed a hill to find Orion at the top.” 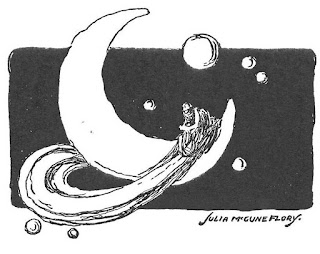 That Full Moon Ride last week, which got Val so hyped (see Monday’s post), was, believe it or not, my first one ever. Sure, I’ve ridden my bike at night lots, but always as a way of getting from A to B. Not since I was a kid have I set out for a night ride just for the sake of going for a ride, and even then, I can’t recall co-ordinating the event to coincide with a full moon.

The idea for this Moon Ride came to me in a flash a few weeks ago while out riding with the lads on a brisk autumn afternoon, and it was as obvious as air: Why wouldn’t we hit the quiet gravel roads under the light of a fullie? Val had taken such lunar excursions before, so he didn’t hesitate. And Penn is pretty much up for anything on a bike. Thus our scheme was hatched. If the skies and roads were clear, we’d go on the next full moon.

When I started thinking about this combination of cycling and the moon, it dawned on me that the two go together in all kinds of ways. There is, of course, the “cycle” pun: the way the moon itself spins and orbits and goes through actual cycles of waxing and waning illumination by the sun.  This fact may be handy for semi-clever blog post titles, but I’m not sure it adequately explains the connection that exists between bicycles and the moon in the human imagination. Charles S. Brooks, I think, gets it right when he touches on the link between bicycles, the moon and dreaming.

Pretty much anyone who was alive in the 1980s will recall that classic Spielbergian moment at the end of E.T. where the boy, Elliott, and his alien pal use a bicycle to escape the evil, pursuing scientists and suddenly, with the help of some extra-terrestrial telekinesis, take off into the sky. 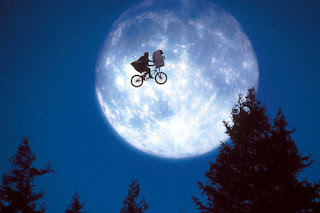 That image of the bike ascending into the heavens in front of a giant moon is utter magic, corny as it is, for it captures two common childhood experiences: the near-universal dream of transcending this earthly realm and visiting that mysterious orb in the night sky (find me a little kid who hasn’t expressed a desire to go to the moon) and the dream-like feeling of freedom and exhilaration that can come from riding a bicycle. This image has become iconic not just because of the famous movie. For many of us, riding a bicycle is as close as we’ll ever come to experiencing the sensation of self-propelled flight. And if we could fly (on or off our bikes), where else would we fly to than the moon?

The perfect soundtrack for that 1980s image, however, isn’t the official, sappy score by John Williams. Rather, I recommend this obscure and goofy gem from The Dukes of Stratosphear (aka XTC) circa 1985:  “Bike Ride to the Moon.”

And we'll bring back cheese for my Auntie Jane
And some magic moon dust that'll stop the rain
On my poor Uncle Alfred's head, even though he stays in bed (silly Alfred)

And we'll pack a tent 'case it's cold at night
And I'll share your sleeping bag if I might
And might be a positive boon
To protect you from the man in the moon
(Who happens to be me, look out!) 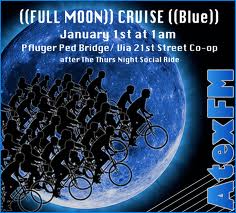 I see now (since I googled “moon bicycle ride”) that Full Moon Rides are actually fairly common in the cycling world. Now that I’ve done one, I can see why. And especially why you’d want to do one with bunch of fellow riders. What’s the fun of a moon cheese and Angel cake tea party by yourself? As the Dukes say, “There’s lots of room for everyone/ On a bike ride to the moon.”


But the moon-bike connection isn’t always a recapturing-of-childhood-innocence thing. The dream of pedaling to or around the moon, as in the passage from Brooks above, can also speak to more grown-up desires that have more to do with the moon’s long associations with myth and poetry. There’s something about that solitary orb—its  distance, loneliness, constant inconstancy, and beauty—that has always appealed to storytellers, poets, and lovers. And if, as Robert Louis Stevenson wrote, the stars are “themselves the most classical of poets,” then the moon is surely the undisputed bard of that astral realm.

I guess what I’m suggesting here is that for some people the moon-bike correlation is ultimately about romance. The lunar- and bi- cycles go together, in part, because they stir similar sensations of freedom and longing. Perhaps nowhere is this more obvious than in the classic bicycle advertisements of the 1890s. 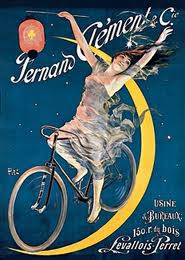 Now, I don’t want to give anyone the wrong idea about me and Val.  On our moon ride we were fully clothed, hair neatly tucked inside our helmets, thinking thoroughly non-romantic thoughts. Yet there was an undeniable magic in the air. At one point on our gravel ride that night, the clouds cleared for a few minutes to expose the moon’s impossible brightness. When we turned off our lights and rode dark for those few minutes, I felt a shiver of giddiness. I was in bicycle-moon trance. It wasn’t a dream, but it felt like one.