F.W. Bockett’s Some Literary Landmarks for Pilgrims on Wheels (1901) is one of my all-time fave cycling books. It’s an obscure gem, from a different age, and full of poetry, wisdom, curious tangents, eccentric advice, and a touch of sentiment. Each chapter tells of one of the author’s pilgrimages by bicycle in southern England to the birthplace or gravesite of one or more (mostly) famous authors whom  Bockett admires, such as Jane Austen, Percy Shelley, John Milton, George Eliot, and Charles Lamb. Bockett provides the expected meditations on the authors` lives and literature, but along the way he offers up some insightful and occasionally bizarre commentary about cycling, all presented in the genial, old-timey voice of the “gentle cyclist.” As quaint and dated as this book feels in some ways (“Whatever you do, do not drink water [while cycling]!”), a surprising amount of what it has to say is just as relevant today as it was over a hundred years ago. Plus Bockett makes some extraordinary (and quite convincing) claims about the ways in which cycling improves one’s life.

This book is a tribute to what Bockett calls “the gentle cyclist”—that is, a cyclist who is also a gentleman: civilized, literary, contemplative, attuned to the natural world around him or her, and (this is important) not concerned with setting any speed records. (The only sour notes in the book are directed at his “enemy,” the “Scorchers,” who he insists are not true cyclists at all.) Bockett refers to himself as an “ambler”; he’s not even semi-serious, except in a philosophical way. For him, cycling is equal parts physical and metaphysical activity. He advises, “Never arrange a [cycling] journey without allowing sufficient time for meditation and contemplation.” There’s a sense, though, that even in 1901, Bockett’s “gentle cycling” was already old-fashioned. 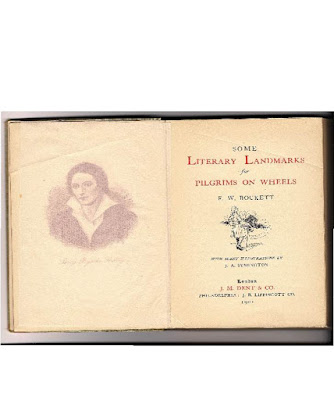 The first intriguing claim Bockett makes is that “gentle” cycling is an inherently literary activity. As he explains, “All gentle cyclists ride with a book in their pockets,” preferably one that has something to do with the area where one is cycling. One of the pleasures of a good day’s cycling, he argues, is stopping for a break, sitting down under an oak tree, sparking up one’s pipe, and enjoying a good passage of poetry or prose before resuming one’s ride.  He also believes that cyclists should always set out “with some particular object in view”—a place of historical or literary significance. “One of the greatest charms of a run on the road,” he claims, is imagining how “on this very road the great So-and- so must have often walked.”
One of the greatest charms of this book is the way Bockett gets excited about the little things on a bike ride: ordnance maps, big trees, rubber tyres, frogs, clouds, cycling goggles, bicycle bells, small village libraries, a lunch of bread and butter. But it’s cycling’s unique ability to allow one to experience the natural world that sends Bockett into his most poetic reveries. In this, he is a cycling Romantic, to be sure. “There is no riding so pleasant as a quiet amble along a winding lane with trees meeting overhead,” he asserts. How true. Cycling, he observes, brings one “face to face with Nature in her prettiest moods.” The modest pace of his ambling is perfect for taking in “a continuous feast of beauty” and “enjoying all that Nature is so ready to give to all who love her.”

Bockett even goes so far as to suggest that cycling has a “moral influence”—that riding a bicycle somehow makes you a better person. He doesn’t elaborate on this, saying rather that some day he’ll write “a lengthy dissertation” on the subject. But his Romantic argument is implied elsewhere, I think: that the contemplative, philosophical mood that can be brought on by a simple “amble” through Nature can’t help but make you a more thoughtful, empathetic human being. 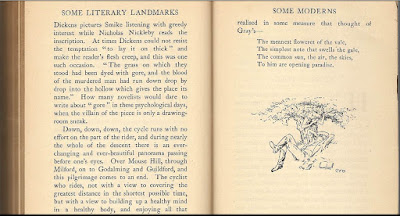 The final chapter of the book stands somewhat apart, as a tribute of sorts to the essayist Charles Lamb. There’s a cycling pilgrimage in this chapter (just as in the others), but the cycling component is less prominent than in the rest of the book. Bockett clearly adores Lamb and may even be a kind of re-incarnation of him; they share a Romantic disposition and a fondness for “gentle folk.” Bockett tries in vain to explain the appeal of Lamb’s writing and finally gives up, asserting simply that “No one can really appreciate Lamb until he is thirty, at thirty-five you begin to turn to him again and again, at forty you are his slave, with the probability of becoming a dotard concerning him at fifty.” The scene by Lamb’s graveside is quite touching. On the first page of this chapter in my copy of the book, some reader, a hundred years ago, wrote this bit of marginalia, with which I heartily concur: “This I love—“

True, Bockett does say some pretty wacky things at times. “Has any poet ever written stanzas to the eyebrows of the first cycle-maiden?” he wonders, at one point, for no obvious reason. Later, he speculates that cycling might have improved the disposition of notoriously cranky philosopher Carlyle: “The adjuncts of cycling would have taken some of the objectionable philosophic starch out of Thomas.” And get this one: “I doubt not but at yonder tree I shall catch a chub.” (He was trying his hand at angling, in honor of Izaak Walton.) But as far as I’m concerned these quirks just make the book even richer in a wonderfully weird way. In fact, I find myself becoming something of a “dotard” about it—and I’m not yet fifty.

Given that Bockett was such a Romantic, it’s not surprising that he sees cycling as a mostly solitary activity. He mentions a companion joining him for only one of his pilgrimage rides; the rest of the time, he’s the lone cyclist/poet figure, the observant outsider, more comfortable with Nature and books than with fellow citizens. That other Romantic, Lamb, once asked, “Whither can I take wing from the oppression of human faces?” On a bicycle, Bockett would say, for it is “a companion to the solitary, a friend that is always exhilarating and never selfish, an aid to reflection; it gives inspiration to the poet, health and strength to the plain man, vigour to the man of science, and breadth to the philosopher.”
Posted by Jasper Gates at 8:26 PM