During my stay in Austin, TX, a few weeks ago, I stayed at a VRBO that came with a bike. I figured this had to be a plus. Even though I had no idea what the bike would look like or even how big it would be, I just figured, hey, I will make it work. It will be nice to have some wheels—any wheels—to help me get around the city. I imagined a utilitarian department-store mountain bike, maybe even some version of the dreaded “comfort bike.” It would probably have a squeaky chain, a kickstand, lots of reflectors, and under-inflated tires. No worries. When you borrow a bike, and sometimes even when you rent one, you take what you can get. 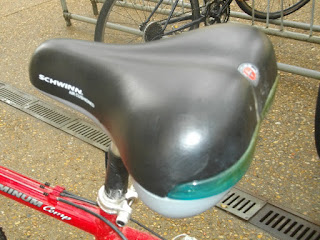 Even though I had been prepared for some “comfort” features, I must admit that, at first glance, I was alarmed at the sight of this saddle. In fact, “saddle” hardly seemed the right word for it. It was a vast, black platform for my buttocks—an unfurling, giant manta-ray of a bicycle seat. The damn thing was bigger than a horse saddle.

Not only was the seat as wide as Texas, it also had an unseemly thickness to it. It looked positively pneumatic, pillow-like. From the side view, you could even see a clear blue layer or kind of window that I think is meant to suggest a kind of air cushion, like in the old Air Jordans circa 1992. I couldn’t help but think that my hiney would sink right into and be swallowed up by the blackness of that butt cauldron. If I tried to mount that saddle, I feared, it would surely take the very jaws of life to extract my ass from it.

But here’s the thing: the saddle actually felt pretty good. It wasn’t soft and squishy, as I imagined. As I set about awkwardly to squat on it, fully expecting the saddle to rise up and envelope my behind, I instead met a surprising firmness. l can’t explain the baffling physics of the whole set up; yet somehow this saddle worked. Each time I got on the bike, I experienced a little “Oh, yeah! This thing!” sensation, which wasn’t entirely unenjoyable.  I couldn’t help but look around to see if anyone had seen me get on the thing.

Yes, call it vanity, but I admit I was a little embarrassed to be seen on such a poofy saddle—at least at first. Road cyclists, even semi-serious ones like me, tend to prefer hard bike seats with slender profiles, for the reasons Val set out a while back on this very blog. I wasn’t supposed to like this saddle, I know. But, I didn’t mind it. True, I never rode on it for more than a couple of hours a day. Perhaps if I had, the saddle’s flaws would have become apparent.

After a few days I even forgot how ridiculous the thing looked—until I would attempt to hop off the bike only to get my leg caught on the over-stuffed butt-dais. Eventually, I even stopped feeling self-conscious about the chunky factor.

How much of my initial skepticism about this saddle was purely a matter of aesthetics? Could it be that I was prejudiced against it purely because of its appearance? Was I being saddlist? Making assumptions based purely on how the saddle looked? Many cyclists, myself included, do this all the time, with bikes, bike gear, and even people who ride bikes. I suppose there is a small if commonplace lesson here, which is to embrace whatever bike parts work for you, regardless of how they might look. Just because you see that Brooks badge on a bike seat doesn’t necessarily mean it’s The One for you.

Don’t get me wrong. I’m no convert. I’m not about to swap out my skinny saddle for a full-on fatty. But neither am I going to be so quick to mock the big boys from Comfort Town, as I once did. Best to keep an open mind when it comes to parking your butt.
Posted by Jasper Gates at 9:42 AM