The Semi-Serious Cyclist has a complicated relationship with spandex.

When it comes to shorts, the SSC acknowledges that the wonder fabric has its practical advantages: it’s light, form-fitting, aerodynamic, and virtually chafe-proof. And when worn by the svelte athlete, spandex can look terrific, emphasizing the best features of a lean physique. Serious cyclists almost always wear spandex. Nothing complicated about it. Spandex shorts and serious cyclists are BFF’s.

But the SSC has some reservations about committing to the short-tights. Sure, he recognizes all those benefits mentioned above. But the only-sort-of-svelte SSC knows that getting involved with spandex can be risky. It’s the alluring-but-bad-for-us fabric mother warned him about. Here’s why. 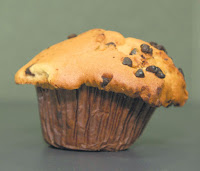 First, there’s the unfortunate gut-muffin effect—that’s when the SSC’s modest roll of tummy fat hangs over the top of the elasticized short band, much like the way the cap of a muffin spills over the top of the muffin tin or cup. However, there’s nothing appetizing or attractive about this abdominal muffin-top, nor is it particularly comfortable for the spandex wearer. The SSC may even be tempted to hike up his bike shorts in an attempt to absorb the entire muffin lid inside the shorts, in which case the cyclist is left with a kind of spandex-encased gut calzone.

The other problem with wearing spandex bike shorts, of course, at least for the fellows, is the one no-one wants to talk about--the elephantitis in the room, so to speak. Of course, I’m thinking here of the cyclist’s bulge. Most serious cyclists don’t appear to be the least bit self-conscious about this. If anything, a serious cyclist nonchalantly displaying his lycra-ed Unit seems to be part of the code of competitive cycling.  But the male SSC, especially as he ages, finds that a creeping modesty comes into play when choosing lower-body cycling attire. When he was a young SSC, things were different. But now he is a tad shy about putting his Package out there for all to see. He prefers a bit of discretion.

Ever practical, the SSC likes pockets too, a feature that’s difficult to find on spandex shorts. He’s got stuff that he wants to bring along on a bike ride: snacks, camera, phone, insulin pump, map, notebook. And it doesn’t all fit in his shirt-back pocket and seat bag. This is one advantage of conventional shorts. And these days the SSC is willing to put up with some wind flappage in return for some sensible storage. 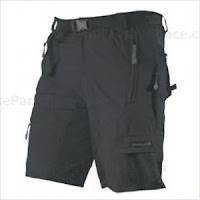 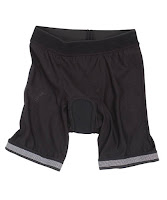 The SSC knows he’s got no long-term future with spandex, but he’s not ready to completely break it off with the wonder fabric. Instead, at least for now, he opts for a middle-aged compromise: a spandex liner underneath a pair of light, slightly baggy, pocketed shorts. Think road-cycling business underneath, mountain bike party-dude over top. The hidden spandex still gives him what he needs, but he doesn’t necessarily want his friends to know it. The liner is the SSC’s secret “special friend,” his sartorial lower-body booty call, if you will —it does the trick, sure, but it’s a little embarrassing, not the kind of shorts you’d want to bring home to mother.

As you can see, the SSC and spandex are still figuring things out. They’ve had some good times together. But the SSC has decided that he’s ready to start seeing other fabrics.
Posted by Jasper Gates at 8:18 AM