An auspicious day here in Austin, Texas, where I’m visiting mainly for work, but also with an eye to escaping Alberta’s winter and getting some riding in.  True, I did get out for my first honest bike ride of the year, first real one in months. That’s cause for celebration itself, sure, but that’s not what made today’s ride special. No, what made this run one for the ages was the post-apocalyptic carnage strewn along the roadside.

I wouldn’t actually say the scenery in south-east Austin was pretty or even nice, really. It’s winter here, even in Texas, so lots of brown, no leaves on the pecan trees, and the grass, while technically green, ‘looks like it’s not really trying. The stark drabness was especially noticeable outside the city limits, when I got on good old country roads connecting dusty towns like Elroy and Cedar Creek. Fortunately, this bleak –brown landscape was enlivened by an astounding amount of garbage, which added some much needed color. We’re talking liquor bottles, beer cans, hunks of plastic and metal and rubber, and the occasional full garbage bag (of what?) lying in the ditch or on the shoulder.  Large bolts, pieces of chain, industrial hooks, hunks of sheet metal—there was enough hardware on these roadsides to build a Mad Max convoy. 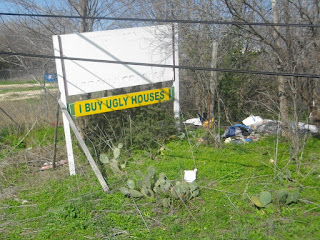 But what was truly extraordinary about this ride was the roadkill--impressive in terms of both quantity and diversity. I always say that a roadkill trifecta, spotting three different dead animals on one ride, is the bench mark in the realm of roadkill. But today—today I passed a hat-trick of skunks before I hit the 15 mile mark. (I must say, though, that one of the skunks barely counts, since it had been so completely flattened that it was more of a silhouette of a skunk; all of the three dimensional bits were missing. I don’t know that it could really meet the criteria of skunk anymore. Its essential skunkiness had been carried off by tire treads and bird beaks.)  Then a cat (always a downer), and—here’s one for my life list—a coyote, a big one (you know what they say about Texas). I tend to think of coyotes as too smart to end up roadkill, but I guess some aren’t as smart as they think they are. (Wile E., anyone?) Finally, there was a small mystery mammal, a one-time quadruped, I think, whose guts were so spectacularly eviscerated that I couldn’t tell what it was.
I didn’t think to take pictures of any of this carnage. It just didn’t occur to me. Only as I was riding back in to south Austin did it all hit me: I was having the roadkill equivalent of a Daryl Sittler-vs.-Boston day, or to switch sporting metaphors mid-sentence, I was close to hitting for the road-kill cycle. I resolved that I would put aside any qualms about good taste and stop and photograph the next casualty, just to document this rare feat. I’m not proud to admit this, but I so wanted to see just one more furry little corpse. I’d have settled for a toad. Of course, there weren’t any. Clean shoulders for the last 10 miles. I felt like the batter who ends the game a triple short of the cycle. A three-for-four game is good, sure, but hardly the stuff of legend.
Flash forward to 9 pm. I just got back from a short night ride to run a few errands, and one block from the place w’here I’m staying, I almost ran over this, in the heart of downtown Austin: 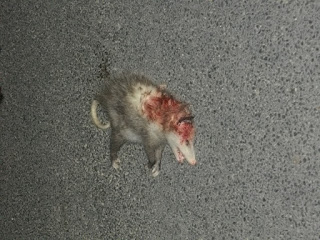 Who knew I could get so excited at the sight of squashed possum. There’s my missing triple!