They say Austin is weird, and I’ve certainly seen evidence of that in the area of East Austin where I’m staying. Even if that weirdness is now somewhat self-conscious or contrived at times (how can’t it be when that phrase makes it on bumper stickers and t-shirts?), I’ve seen plenty of authentic, genuine-seeming weirdness too. 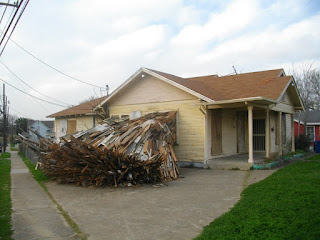 For instance, I rode past this house the other day; it appears to be spewing its wooden innards out through the window into a perfectly constructed, crystalline-like, frozen wood-shard cascade. Some kind of art installation/political comment on the mortgage crisis? Who knows? I stopped to take a picture, but no-one else paid it the least mind. Later the same day, I saw something else that qualified as weird. Two different times (!) I saw topless women being photographed, no doubt by “professionals”, in what I think was meant to be provocative poses, in the open air against woodsy backdrops—as cyclists like me rode by. One thing I’ve noticed about Austin-ites is that they don’t ask too many questions. They just accept the weirdness. 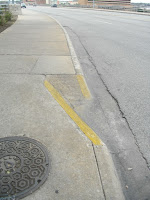 I’m happy to report that the bike scene in Austin is fully on-board with the weirdness. There’s a thriving bikey culture here, like you’d expect to find in a progressive, artsy, university city. That means Austin features  lots of the usual cycling infrastructure: pretty good bike lanes, a lovely trail system, impressive bike route signage, and cute little ramplets like this one allowing bikes to switch onto sidewalks when crossing major bridges. It’s a fun and mostly easy city to ride around in.
But I’ve seen some wacky bike stuff here too. In the downtown area, after dark, hordes of pedal-cab trikes come out of the woodwork: dozens of passenger tricycles driven around by skinny, thickly bearded university students. Each night I’ve been downtown, I’ve seen some other oddities on wheels. The double-decker dude makes his nightly rounds. Then there was the old guy hauling a gigantic trailer with a ginormous cage on it containing a howling German Shepherd. The strangest bike thing I saw, though, was this kooky contraption I stumbled across on Rainey Street: the Bike Zoo, it’s called—an illuminated bicycle-powered float in the shape of a snake. Apparently you can rent it out. 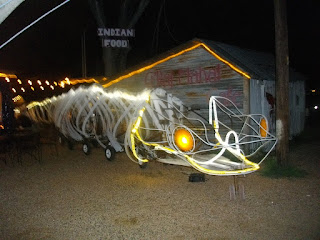 The ultimate expression of Austin’s unique bike culture, however, has got to be this classic Texas beauty at Longhorn Cycle, just around the corner from where I’m staying in East Austin. Theyve got another one inside, a Surly custom Longhorn Special, that you can rent out. 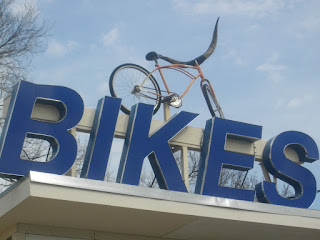 I was tempted to take it for a spin, just so I could feel, for a moment, like the cycling equivalent of Fred Flintstone’s rich Uncle Tex, with his longhorn hood ornament. Weird, sure, but I doubt anyone here would even notice.
Posted by Jasper Gates at 9:25 AM