Happy ERP Day, everyone. Today is the birthday of Elizabeth Robins Pennell (or ERP, as I like to call her), one of the pioneers of cycling writing and a particular hero, or, I guess I should say, heroine, of mine.  She was born in 1855 in Philadelphia but lived a good portion of her prime years (1884-1917) in London with her husband, Joseph Pennell, a well-known illustrator and sometimes-writer. Together, they were a prolific creative duo, producing dozens of books and hundreds of magazine articles on their favorite subjects: art (especially him), food (her), travel (both), and, especially in the 1880s and 90s, cycling (both). They produced five illustrated cycle-travel books (some of which I’ll discuss in detail another day) and dozens of illustrated magazine articles about their adventures on a tandem tricycle and, later, bicycles in England and across Europe. 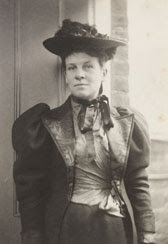 Their work is mostly forgotten now, by all but a handful of eccentric enthusiasts of old cycling literature, but in their day, the Pennells enjoyed some small success and fame for their riding and writing (and illustrating) exploits. Joseph was the better known Pennell back then. He established a reputation as a fine illustrator of architecture and landscapes; he was also a prolific art critic; and he was heavily involved in the cycling club and cycling society scenes in London.

Though not as devoted to the actual riding, Elizabeth was the better writer, even if that wasn’t recognized in her day. She was in fact, the first semi-serious cyclist, or at least the first to write about cycling as one. She liked to say she was a “novice” when it came to cycling, but she rode clear across Europe, including the Alps. In her writing she comes across as an ardent advocate for cycling, capturing, as passionately as anyone, the joys of travelling by cycle.

But she never took cycling too seriously, and, in fact, had great fun mocking those who did. Her satiric treatments of overly-serious Victorian "scorchers," those of “the time-making species,” and of the preening peacocks of the cycling world (like Sandrino, below) make her a kind of Victorian Bike Snob in petticoats. Her husband got most of the fame, but she was the under-appreciated genius. 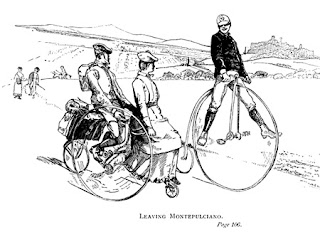 The Pennells’ delightful cycling books are now hard to find, a predicament  I hope to help change some day. I think ERP’s insight, literary bent, and wit would go over marvellously with readers today. In 1889, she was profiled in The Penny Ilustrated’s series of “Famous Women” but it’s always seemed to me that she deserves recognition not as a famous woman so much as a famous cyclist, for there are few who contributed so much to the creation and growth of early cycling culture. Here’s to you, ERP!
Posted by Jasper Gates at 5:00 PM