No, not the Jules Verne tale—you won’t find giant mushrooms or subterranean dinosaurs here. But this adventure-cycling Journey to the Centre of the Earth, by British cousins Richard and Nicholas Crane, published in 1987, documents a trip that is so fantastical that you might be forgiven for thinking it the stuff of science fiction.


Here’s the premise: a cycling trip to the most remote point on the earth’s surface, the spot supposedly furthest inland from the open sea: in western China, south of Siberia, west of the Gobi desert, and north of the Himalayas. As with the poles, the Cranes’ “centre of the earth” is not an actual recognizable place; rather it’s a concept given physical and symbolic (at least to the Cranes) manifestation. The Cranes say they got the idea from reading a description of the theoretical place in the Guiness book of World Records. Their route takes them from the Bay of Bengal, in Bangladesh, into north-east India, across Nepal, and into Tibet, and the remotest parts of western China. 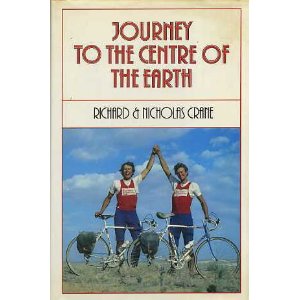 That goal alone, travelling 5000 km over the breathtaking altitudes of the Tibetan plateau and across the Gobi desert, is itself impressive. But what makes this adventure story truly outrageous are the self-imposed restrictions on how they’d do it: on racing road bikes (not sensible mountain bikes), travelling ultra-lightweight, and fast—only 50 days is their goal (that’s an average of 100 km per day across some treacherous “roads”—often little more than desert trails).

Now these Cranes are no ordinary cycle-tourists. They hail from a family of hardy ultra-adventurers, and prior to this trip, both had considerable experience with long, difficult expeditions, recounted in their earlier books such as Running the Himalayas and Bicycles up Kilimanjaro. They are the kind of extreme cyclists who seek out the most challenging, outrageous routes, and then blast their way to the destination through a combination of remarkable fitness, stamina, and old-fashioned, British, stiff-upper-lip stoicism.

The Cranes’ method of “super-spartan cycle-touring” blew my mind. I couldn’t decide whether I found it refreshingly bold and adventurous or just plain dumb and foolhardy. Perhaps it’s both. They each brought only one set of clothes, minimal rain gear, a small sleeping bag, camera and tape recorder, notebooks, meds, maps, and a few small tools. That’s it. No tent, no food. Only one water bottle each. Even across the Gobi desert.  Their plan was to find food, water, and lodging along the way, relying on chai houses and hotels in populated areas, and on the generosity of locals in remoter places. In the desert, they counted on occasional passing trucks to stop and share water.

So obsessed were they with lightness that they snipped the labels out of their clothing, cut off excess parts of their maps, and drilled holes into equipment, including their actual bicycles, to shave off a few grams here and there. Being ultra-lightweight was a point of pride for the Cranes. We’re told that the few other touring cyclists they encountered marveled at their “tiny bags.”

For the most part, amazingly, their ultra-light method actually worked. On days when they could ride, they went fast and far, often over 150 km a day, the longest being a 212 km day. Yes, there were some uncomfortable nights spent under the stars in the Gobi or shivering in a cave during a snowstorm, but most of the time they were taken in by locals who extended an unquestioning hospitality, providing food and a place to sleep, often refusing to take any money in return.

One of the striking things about the book is the Cranes’ portrayal of the Chinese—just how accommodating and generous they were to these strange bicycling Brits, whose endeavour must have seemed daft to them. In exchange for food and lodging, the Cranes offered a comical nightly routine of entertainment, whereby the cousins would attempt to overcome the language barrier through a ritual pantomime of their adventures and recitation of Chinese place names they had travelled to or were heading towards. When feeling particularly silly, they performed the “contact lens trick” for their hosts: removing and inserting their contacts (don’t ask me why they’d choose to wear contact lenses in the desert—it was the 80s, is all I can say), to great guffaws.

I found myself shaking my head as I read this book, partly in awe of the Cranes’ stamina and determination and partly in wonder at their stupidity and arrogance. (In that sense, the book reminded me a bit of Jon Krakauer’s Into Thin Air, another extreme-ego-adventure account.) At one point in the Gobi desert, they resolutely refuse to take on extra water when available, insisting that they stick to their original ultra-weight plan, despite not knowing when they’d hit water again. (In that case, about 60 km of blistering desert riding later.)

My favorite example, though, is their ill-advised attempt at a short-cut in Tibet. Desperate to quickly get to Lhasa, one of their major stopping points, Richard insists they forgo the actual road, which goes over several mountain passes, and, instead, take the more direct route along the Brahmaputra valley. The only catch? There’s no road on the map for this “obvious route.” Perhaps for good reason, as they discover. They scramble along a torturously steep track, disregarding the warnings of farmers who indicate they should turn around, and end up in a “ghastly mess” as the snow begins to fly—sleeping en-plein under a rock overhang. The next day they find their way back to a road and discover they’ve saved neither time nor climbing at all.

There’s something hilariously British, and a tad imperialistic, about this whole adventure: an implicit assumption that the locals will take care of them. All they have to do is knock on someone’s door, wave some cash, and be British, and the rest will take care of itself. The cousins wear their ridiculous salopets (those so-very-80s unitards), drink tea at every opportunity , and say things that only a British person could:  Richard: “I’m afraid to say that men from non-Western cultures dressed in Western clothes always turn me off”; Nick: “One of my favorite fantasies has me sprawled in my flat, with a big pot of tea and a packet of chocolate digestive biscuits.” Blimey.

Part and parcel of this British-ness is the Cranes’ reticence to talk much about their emotional states during this arduous trip. You’d think that a journey to the top of the world and across deserts and desolate plateaus would lend itself to some kind of spiritual reflection or at least mental squirrely-ness, but there isn’t much of that here. I perked up, though, at the occasional mentions of tension between the cousins: disagreements about route planning and pet peeves borne of spending all day every day together. They clearly got on each other’s nerves at times, but those potentially rich bits of tension are mostly glossed over, dismissed as being insignificant when weighed against the “stacks of adventure” they shared.

The Cranes aren’t exactly my kind of cyclists; there’s nothing semi-serious about these blokes. But I enjoyed their book. The sheer audaciousness of their whole adventure carried me along. I’m surprised they didn’t follow it up with cycling versions of Around the World in Eighty Days or even—here’s a challenge—Twenty Thousand Leagues under the Sea, just to complete the Jules Verne trifecta. If any cyclists would be so bold as to try, it would be these Cranes. Watch out, Captain Nemo.
Posted by Jasper Gates at 10:34 PM