The fixed gear lends itself to neglect.  It lacks derailleurs to chatter and balk when they've gotten too dirty or knocked out of alignment.  The brakes rarely get pressed into service, so they don't really wear down.  Thus they also don't squeal or rub or chatter or do any of the other annoying things brakes do.  They just hang on and enjoy getting shuttled all over town.  The dishless wheels give a big bump in strength, especially when coupled with a deep-dish rim.  No broken spokes here, nor even any call for truing duties.  I also run some bomber, oversized Armadillo tires on it; I think they are made of recycled metal.  They don't ride all that spectacularly, but I don't think they're going to wear out any time soon.

All of this seems like it should result in a bulletproof bike, and, mostly, it does.  But the result of that is a bike that I just flog mercilessly.  The chain gets oil splashed on it once in awhile, and I pump the tires when they look kind of flat, but that's just about it.  Otherwise, it spent the whole season churning Alberta's gravel roads and icy streets without much attention.  And that's fine.  I don't feel guilty about it--this is why I own this particular bike.  But, that said, such treatment takes its toll: 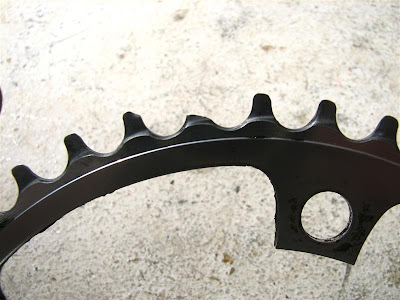 I'd thrown the chain a couple of times towards the end of the season, and once I'd scraped the accumulated grunge off of the ring, I found a good clue as to why.  This ring is done, folks.  Broken teeth, shark-toothing, and, of course, the ramps and shaping necessary to make a chain shift cleanly.  It's true--rather than a single-speed specific ring, I had been running something from the depths of my parts bin.  It was good for many, many miles, but it's clearly reached the end of its road. 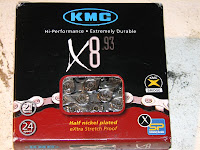 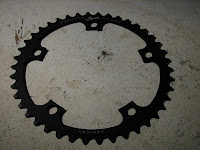 Happily, the magic of the internet had already brought new goods to my door.  Brand new.  Hard aluminum.  Single-speed specific teeth.  A swank black coating.  And a new ring means a new chain (the cog is almost new, so it stays), so I ordered up one of those, too.  I have run SRAM chains exclusively for years, but I decided to try out something new with this KMC.  Marketed as "stretch proof," but as that's impossible, I suspect it just means "really hardened and will destroy your gears before you notice it's worn."  That's fine.  I'm happy to switch out all this running gear again next winter.  It looks like we're in business for another season here.

Of course, the very next day the weather turned warm.  The studded tires went on.  The garage door went up.  55k of salty, sandy roads stood in for this set-up's baptism.  It's already creaking and groaning and scraping in misery.  Riding season's opened.  For the fixed gear, at least, the shop is closed.