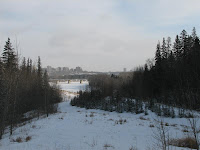 
A warm winter has left the city glazed with a layer of ice that goes half-a-foot thick in places, but nothing white on top of it--not much use for a fatbike in those conditions.  But the last few days have brought an Arctic blast of cold and a few inches of snow, so the time seems right to inaugurate the Pugsley.  I'm not undertaking anything epic here, despite last week's inspirational video.  Just a little urban spinning, a little turning of the pedals under the sun instead of inside a garage, but surrounded by houses and high-rises all along the way. 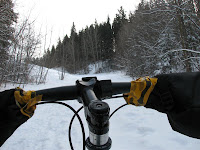 No matter.  There's a lot to be said for fresh air and sunglasses.  The Pugsley isn't exactly a new bike to me, as I gave it a good number of dirt miles this summer, but blasting through a powdery field to get down into Edmonton's river valley is a new feeling.  A good one.  It is cold out here though, glad I wore the balaclava even though breaking a new track heats the blood up pretty quickly.  The most surprising feeling is the complete normality of it all.  It just feels like riding a regular bike, even though I wouldn't try to ride a regular bike here.  I like it .  Plenty.

Feeling good, I keep rolling towards downtown.  Not many other trail users out here.  A few folks with their dogs who look used to having the place to themselves.  A cross-country skier who muffs her stride while staring at me for too long.  A few walkers who look like they miscalculated their day.  Here, where the park is still mostly trees and I'm off on a side-track, everything is quiet and bright.

As I close in on the urban core, there's a sudden change in the path.  At a certain point there's clearly a change in the maintenance designation; the path becomes maintained, plowed, scraped down to bare asphalt.  More trail users here, more joggers.  I pass a woman with ice-rimed eyelashes.  I have little use for running, but I admire the hardcore devotion of her efforts.  For a moment, I wish I still had my movember 'stache so I could cultivate a similar Arctic-explorer aesthetic. 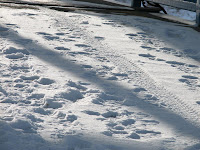 Down here things are more open, and there's a solid tailwind hustling me along; I don't feel nearly out of shape as I am.  I decide to roll down as far as the bridges before turning back for home.  I only have about an hour, but I'm feeling good.  At the bridge, there's fresh sign in the snow.  Another fatbike.  Been through here recently, the wind already working to erase sharp edges of their imprints.  Curiousity.  I know there are a few others in this city, but only a very few.  I wonder who this is.

Up on the bridge, over the river, the wind has free reign.  Something like negative twenty-eight degrees Fahrenheit windchill, they say.  I don't put much stock in windchill numbers, but the temperature here is icy and cutting.  The pedestrian working his way north crabs along sideways, trying to shield his face from the wind.  I've stopped to take a few pictures of the river where the current has kept the ice open, but I regret it.  I can't get a good angle to capture the steam boiling off the water and I can feel the skin above my cheekbones threatening to crystallize.  I stash my camera and head for home wishing I had my ski goggles. 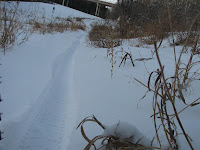 Homeward is uphill and into the wind.  After that maintenance line, it's also through snow and ice.  I realize now that I'm every bit as out of shape as I thought I might be.  Three months or more since I've really been out on a bike ride.  I'm just plugging along now.  I feel like I'm not doing this magnificent bike justice.  It's a slow grind.  I'm going to be late getting back.  Far better than being late because I'm stuck in traffic, though.  It's good to be out, but it's clear I'm going to have to get out more.

I'm ok with that.