I got to know Brock and Cindy a bit a few years ago when I was working on a magazine piece about bike art and interviewed them over the phone. And I’m a big fan of their work. In fact, I’ve purchased several bracelets and sets of earrings over the past couple of years. This stuff makes for hip, unique gifts for bikey friends and loved or liked ones. My wife gets asked about her chain bracelet almost every time she wears it.

The Garvins started small. They are a family of avid cyclists, and over the years they had accumulated a collection of worn out high-end bike parts that Brock just couldn’t bring himself to toss. Brock’s a metalworker by trade, and he had too much respect for those fine SRAM, Shimano, and KMC components to relegate them to the scrap pile.  Then one day, years ago, their young son asked if Brock could make him a bracelet out of an old bike chain. But not just any old bike chain bracelet—one with an invisible clasp. So Brock came up with what is now one of their most popular items: the ingenious “hidden link” bracelet. Soon he found himself making bracelets for his kids’ friends, and their friends, and their friends’ friends. Eventually the Garvins designed a few more products, such as spoke bangles, and set up shop on the web. They long ago exhausted their own supply of parts and now source their material from a handful of cooperative local bike shops. They’ll even make something beautiful for you out of your favorite retired chain or cogs. 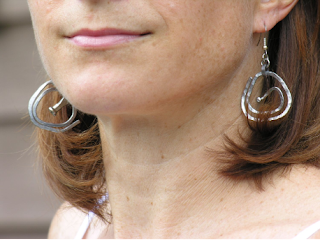 Brock and Cindy are onto something. Recycled bike art seems to be popping up everywhere these days, at farmers’ markets, craft shops, fundraiser-auctions for cycling organizations, and, of course, on the internet.  A quick troll on-line turns up all kinds of sites selling recycled bike items. “We’ve learned that cyclists really, really like their bikes,” explained Cindy back when we yakked on the phone. “They’re beautiful machines, with lots of shiny, visually appealing parts. So when a bike’s riding days are done, it’s a shame for those shiny, pretty parts not to be seen and used again. Plus cyclists tend to be proud of their devotion to bike culture and want others to know it. What better way to signal your membership in the tribe than to wear a part of your bike on your wrist or neck or belt?”

Business has been brisk, especially with overseas customers, and you can see why. While a lot of the bike jewelry you see on the web has a funky, do-it-yourself, unabashedly amateurish look (after all, why wouldn’t it look recycled?), Cindy and Brock’s work is different.  The jewelry they make looks shiny, polished, new—professional. You’d never guess, at first glance, that the bike parts in their work are on their second careers. It’s as if Brock and Cindy’s passion and attention to detail somehow revive the dead parts and breathe a kind of aesthetic second life into them.

Recently, I asked Cindy and Brock for a big favour, and, man, did they ever come through. I wondered if they would create a custom piece for me, a baby gift, for a cycling friend’s baby. My request was ridiculously vague; I proposed, at my wife’s suggestion, “some kind of mobile”—you know, some dangly, shiny bike parts somehow strung together. That’s it. That’s all I gave C & B to go on.

But, just as they responded to their son’s challenge all those years ago, they took on this one too without hesitation, gamely designing and creating this little masterpiece, and asking me to pay only a fraction of its real worth. Each of the dangly objects is a gem in itself: a flower, dolphin, ladybug, dragonfly, and hummingbird. They’re attached by cables and magnets to a chain ring. The only non-bike parts I can see are some glass beads tastefully worked in to add some color. My wife and kids and I like it so much we briefly considered keeping it for ourselves. 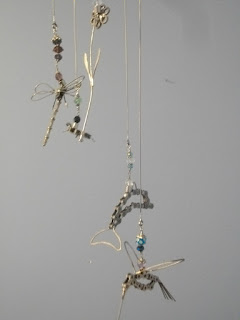 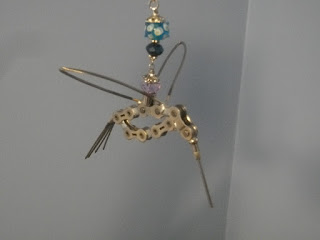 If this were a real infomercial, now’s the time when I’d try to close the deal. I’d tell you how much this piece would cost you and how easily you could get one for yourself at the click of a few buttons. I might even offer some Ginsu knives or a mini-Slap Chop if you order in the next 30 minutes. But you can’t actually buy one of these mobiles. This piece is not for sale on the Recycled Accessory website, at least not yet. C & B say they might consider adding it one day, when they have more time to devote to this growing business. The mobile remains a one-of-a-kind. But for now you can buy some of their other fine merch and be the hippest dude in your peloton.

I feel lucky to have played a small part in the creation of this one-off work of bike art, and I feel fortunate to know Cindy and Brock Garvin well enough to have benefitted from their good will, creativity, and generosity. I think the way they see it, their customers may not be family, but they are part of the tribe, and that’s a powerful bond, one that can’t be measured in dollars and cents alone.
Posted by Jasper Gates at 10:57 PM