It’s All about the Book 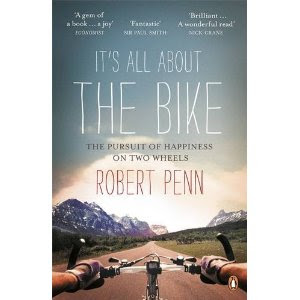 This love-letter to the bicycle has a simple yet rich premise: life-long cyclist Robert Penn needs a new bike. Like many of us, Penn cycles almost every day and owns several bikes (purchased the conventional way, off the rack). But while these bikes all work just fine and bring a certain pleasure, none of these bikes feels entirely his, he claims.

So he decides to forgo the easy route (buying another one off the rack or internet) and instead slowly, carefully, thoughtfully seek out the various parts to put together his dream bike, a bike that, he explains, will be something more than utilitarian: a “talismanic machine that somehow reflects my cycling history and carries my cycling aspirations.” (This may sound a bit hokey, but I think that deep down even semi-serious cyclists can relate to Penn’s dream.)


The implicit assumption here is that most factory-made bicycles, like so much in today’s world, are not made to last, and that we can only ever have a superficial connection to them. We don’t get attached to bikes anymore. Even very expensive bikes, these days, all too often end up in short-term relationships with cyclists; when a new, more attractive carbon-fibre hottie shows up in the local shop, riders are quick to trade in, trade up.

Penn, however, wants a long-term, love-of-his-life, soul-mate-kind-of-bike, and he’s willing to invest the time, effort, and of course, money (as with any good fantasy, money doesn’t seem to be an issue for Penn), that it takes to build this kind of quality. Think Slow-Bike-Building Movement: it takes longer and costs more, but it’s better for you physically and spiritually.


Penn devotes a chapter to each key bike part, and takes us with him on his thoughtful journey to Italy, America, Germany, and England in search of the world’s leading bike craftsmen. Along the way, he recounts illuminating bits of cycling history and fascinating stories behind bicycle-part legends such as Tullio Campagnolo (gear components) and John Boultbee Brooks (saddles). He sprinkles in some personal anecdotes of his own extensive bike travels. And, best of all, he tells the stories of the passionate and sometimes eccentric characters who build the various parts of his bike.

Now, I’ve never been one to get all that worshippy about bikes as objects. Sure, I like swank bikes as much as the next semi-serious cyclist, and if given the choice would probably take the Cervelo over the CCM. But I generally find bike-fetishists an easy target for satire. We’ve all met these oglers, fondlers, and swooners. They’re all too often more interested in the bike than the ride, the object than the experience.


Thankfully, Penn isn’t one of these. Yes, he clearly appreciates fine bike parts, but they aren’t an end in themselves. It’s ultimately the bicycle experience that he’s passionate about, and what’s so great about Penn’s writing is the way he captures that experience and the genuine sense of relationship that can exist between rider and bike. Listen to this:


The bicycle saves my life every day. If you’ve ever experienced a moment of awe or freedom on a bicycle; if you’ve ever taken flight from sadness to the rhythm of two spinning wheels, or felt the resurgence of hope pedalling to the top of a hill with the dew of effort on your forehead; if you’ve ever wondered, swooping bird-like down a long hill on a bicycle, if the world was standing still; if you have ever, just once, sat on a bicycle with a singing heart and felt like an ordinary human touching the gods, then we share something fundamental. (16)


Sing it, brother! As you can tell, Penn is alive to the poetry of the cycling experience, and there’s a wonderful literary-ness to this book. Each chapter features an epigraph from the likes of a “famous” cyclist (Sartre, Einstein, Leslie Nielsen). And Penn refers to several classic pieces of cycling literature (not just travel literature but also Literature literature), such as H.G. Wells’s novel The Wheels of Chance, Flann O’Brien’s novel The Third Policeman, and the poetry of Patrick Kavanagh and Seamus Heaney.


For me, the only even kind of boring parts of this book are the technical bits, where Penn starts using words like “chamfering” and “riveting” and waxing on about 953 steel and providing formulas for seat tube angles. There may be a certain poetry in this for some more serious or more technically minded readers (I’m looking at you, Val), but I found myself glossing over these parts.


Plus, as much as I like this book, I do think there’s something slightly unnatural about creating one’s soul-bike as opposed to finding it through the cosmic scheme of things. Doesn’t serendipity play a role in a true love story? (You know, the way you stumble across the perfect garage sale special?). It’s kind of like genetically engineering every aspect of your fantasy lover—sure, it’s appealing, but is that the way the best relationships are formed? What about the old give and take of compromise? My ancient Bianchi doesn’t quite fit me, but I still like it. Quite a lot, in fact. It’s grown on me. We have thing together.

Finally, while there’s an element of nostalgia in this book—Penn recalls a time when bicycles seemed somehow purer, when builders and riders sought quality, and recognized the time and cost of quality—ultimately it left me optimistic about the future of bike building, especially in the United States. Some of the most engaging stories he tells involve a new generation of American custom bike part makers in places like Portland and California, who seem to have a passion for making quality bicycle parts that was once found mainly in Europe and England.


Most of all, though, Penn’s book is an elegant affirmation of what many of us already know: There is an exhilarating joy in the world that spreads out “beyond the handlebars” (186).
Posted by Jasper Gates at 10:22 AM