Fall is here: astronomically, but in the leaves all over the road as well.  And, what’s more, where I’m riding now I might as easily write that winter is here.  In northern those two seasons travel in tandem, working as a frosty and decisive team.  Today the leaves turn, and tomorrow the sun turns off. 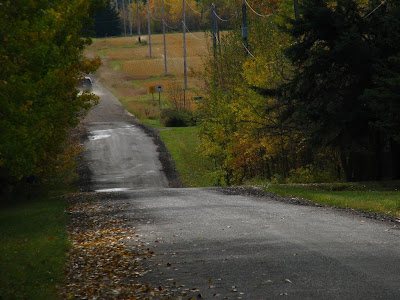 Fall’s arrival is always an uncomfortable time for cyclists.  The calendar of events gets pretty empty aside from cyclocross races.  Conversations about trainers and rollers and spin classes start occurring with alarming frequency.  The phrase “next year” dominates one’s to-do list.  Cultural mythology with a lot more reach than just cycling associates autumn with the inexorable winding-down which proceeds death.  (And not the fun, candy-filled death of Halloween, but the icy, frozen really-real death of winter).  Pulling on tights for the first time in fall, as I did this week, can feel like the donning of mourning garb.

But speaking truthfully, I rarely enjoy any riding season more than autumn.  Aesthetically, fall colors have a depth and variety other seasons struggle to match.  Really, though, autumn’s appeal lies in the fact that it takes me until then to really ride with pleasure.  The same temperatures that put force gillets and gloves at the opening of a ride let you stuff them in a pocket and hammer your heart out with an efficiency the summer sun would never tolerate.  The miseries of spring, the sharp suffering of the annual attempt to bang the legs and lungs back into shape, belong almost to another era by time the combines roll out for the harvest.  Fittingly so—autumn lets you collect on all the effort poured into your legs throughout the season.  Fall brings fruition. 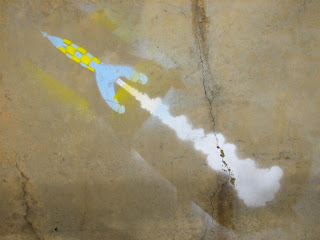 My ride this week, the first one that required tights, also led me to this little piece of graffiti.  This just appeared this fall, too, and I take it as a propitious message.  Let the leaves fall.  Things around here are just taking off.  Feel free to ride along...
Posted by Val Garou at 1:44 AM