Code of the Semi-Serious Cyclist: Part One

The Semi-Serious Cyclist (SCC) is never too cool to say hi to other cyclists. Or to at least somehow acknowledge other cyclists. Or, for that matter, pedestrians, people sitting on their front porches, seniors on scooters, even folks in vehicles on quiet country roads. Heck, anyone who’s outside, period, within eyeshot of the road. Even a dog, a cluster of cows. This acknowledgement may take any number of widely accepted non-verbal forms: a ring of the bell (a favorite with cows), the full on wave, the handlebar wave (either full hand or one or more fingers), the nod, the smile, the raised eyebrows, or, simply, eye contact. 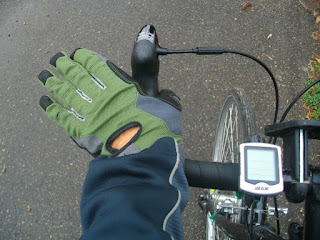 Classic Four-finger Handlebar Wave
The SSC enjoys cycling and is generally happy to see others out doing the same. So that “Hi” or wave or nod is a kind of wink-wink among allies, a tacit acknowledgement that we are all, in one way or another, part of that unofficial Brotherhood (in the generic sense) of the Wheel. The SSC—this is crucial—refuses to partake in bike snobbery. The SSC says hi to all cyclists, not just the ones from the same bike clique. This means acknowledging everyone: the fixie-riding hipster, the reflector-vest commuter gal, the be-hoodied drug dealer on a trick bike, the lost-license Larry, the pipe-smoking recumbent dude, even the homeless guy humping a giant bag of empties on his handlebars. And kids, especially kids. They know and are willing to share, more than most, the joys of riding a bike. If you’re in the saddle, you’re worthy of a wave or nod.

And, yes, the SSC even says hi to the Über-Serious Roadie (USR). Or at least tries to. Alas, all too often the USR, existing in a small bubble of lycra-carbon/titanium, fails to acknowledge the presence of other cyclists—he/she (let’s be honest: it’s almost always a he) stares straight ahead, zombified almost, refusing to notice the existence of other riders. He’s in “the zone,” apparently, too focused and intense to stoop to the conventions of cycling civility. The USR, perhaps, sees himself as above the two-wheeled masses—of another, more select breed altogether. For him, cycling is more about suffering than pleasure. Social interaction with non-USR’s, sadly, isn’t part of the experience.

But the SSC still tries to make that eye contact with the USR. The finger wave is always cocked and ready fly. Cyclists one and all, swell fellows of the wheel, the SSC salutes you!