A cycling friend lives in a small downtown condo. Over a dram of scotch (an 18 year old Bowmore whose “waxy apple peelings, with a citrus fruitiness” will become “more evident with time”) my friend told me he found a bike in a bush not far from his condo. It was exposed by the fallen leaves. It was not a bike he wanted; it was a small trick bike with bent handle bars and rims, a ripped saddle, hacked blue paint, and a rusty chain. He walked by it several times over several days before deciding to take it back to his condo.

He could have walked away, ignored the bike—passed the problem on to someone else. But ever the rectitude of decency, my friend phoned the police to report his finding. He told me, a haggard sounding officer answered the phone. And, after explaining that he found a bike, the officer politely told him he could take the bike to any police station to get rid of it. If unclaimed, it would be auctioned off. The police officer informed him that the police force had, in years past, had someone who would pick up the neglected bicycles that bestrew the streets. But, it did no longer. The police office did not ask his name or any particulars about the bike. 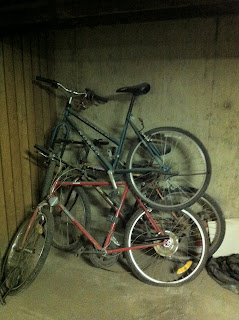 Of course, I told him he could just as easily haul the bike to some benevolent cycling organization for it to be recycled, repackaged and redistributed. A bike’s financial value is a precipitous descending slope; what are we to do with those bikes that are abandoned and unwanted? What should you do when you find an unlocked, forsaken bicycle? In his garage there are 8 parking stalls, and there are 19 bicycles. Some are locked to pipes, some locked to each other, and some not locked at all—just piled in the corner, the abandoned detritus of vacated tenants. “North Country,” “Free Spirit,” “Mountaineer SK”: These bikes are not renowned; rusted and bent with neglect, they await removal by the building management.
Posted by Penn C. Reveaux at 12:01 AM