One More Kilometre and We're in the Showers 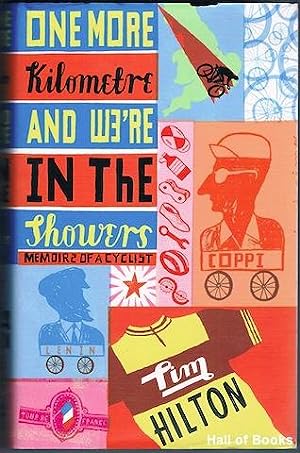 Tim Hilton’s 2004 cycling memoir, One More Kilometre and We’re in the Showers, is my kind of cycling book. It’s a charming account of Hilton’s cycling life in Britain in the second half of the twentieth century, and it covers both his fan’s perspective of continental pro racing as well as the history of Britain's unique club cycling and cycle-racing cultures. Hilton’s background as an art critic (biographer of Ruskin), together with his communist upbringing, gives him a unique perspective on this world. His delightful book is literary (full of poetry and descriptions of club magazines from the 1950s and 60s), nostalgic (celebrating the romance and mythology of English cycling’s past), visual (an image accompanying each short chapter), and chock full of stories that capture a time and place when cycling mattered in almost every town and village.


A good chunk of the book (about a third) consists of a fan’s notes that recall the glories of European pros Hilton followed closely as a young man in the 1950s and 60s:  Coppi, Anquetil, Charly Gaul, Jean Robic, Louison Bobet. Hilton recounts famous races, glorious battles, and tragic demises of the greats, most of which he followed in French cycling magazines of the day. Although I can see why Hilton wanted to include these stories, they are, for me, the least interesting bits in the book; I’ve heard a lot of them before, most many times. I get that this fandom of youth is an important part of Hilton’s attachment to cycling, but a lot of these stories feel impersonal, and I found myself skimming through these sections.

But the rest of the book is a wonderful—a personal history of twentieth-century British cycling,  of a sort I’ve not encountered before. He includes chapters on cycling magazines, fall hill rides,  End-to-Enders, summer racing on grass tracks, 12-hour rides, and new-to-me British cycling legends like Reg Harris, Brian Robinson, Beryl Burton, and Eileen Sheridan.

One of my favorite chapters is about Frank Patterson’s charming illustrations for Cycling magazine from 1893 to 1952, which he produced under the pseudonym GHS. These simple drawings capture rural or village scenes of ye olde England, always with a lone bicyclist pedalling romantically along the laneway. As Hilton says, there’s something both lovely and sad about these images of empty villages, reflecting a post-WWI age when touring writers with lantern-slide images gave lectures on cycling adventures but that also saw so many places lose all their men and boys in the trenches. (The great irony, Hilton explains, is that Patterson, who created something like 26 000 drawings for cycling magazines, was himself not a cyclist at all.) Hilton also reminisces fondly about the camaraderie and romance of mid-century club cycling, with its Sunday runs and time trials, winter social events and club dinners. The bond was intense among Dartford Wheelers, Tyneside Vagabonds, and Colchester Rovers. As Hilton recalls, “Cyclists were said to have carried two photographs with them during their active service: one of a wife or girlfriend, the other of their club.” The brotherhood is strong in this cycling universe, and not just among Hilton’s communist friends. He does talk about a few women riders and even a women’s club (Rosslyn Ladies of the 1930s), but his kind of social cycling was largely a boys’ club.

As Hilton explains, the history of British cycle racing is unique because of its anti-road-racing bias that lasted well beyond the middle of the twentieth century. In the 1890s, the influential National Cyclists Union forbade the running of mass-start races, which it deemed chaotic and detrimental to the reputation of cycling in general. (In general, the NCU was big on touring, not so big on racing.) That ban lasted for decades, and the dearth of road racing lead to the development of vigorous track-racing and time-trialling traditions in British cycling. (It’s worth noting that Hilton’s book pre-dated the rise of Bradley Wiggins, Mark Cavendish, Chris Froome, and Team Sky, who’ve established Britain as a road-racing power; in 2004, when this book appeared, the most successful British road cyclists had been Tom Simpson and David Millar.)

Hilton makes a compelling case for Sunday morning time trials as the English equivalent of the Belgian kermesse: “English cycle racing at its most basic level.” They happened early, 5:30 am, and there were no spectators to cheer anyone on. “Nobody gives you a clap,” Hilton says, “since bored girlfriends are sitting in cars, reading the newspaper.” Results were posted on a bulletin board at the town hall. The whole thing was wrapped up before most folks even got out of bed.

Time trials, of course, are not so common in North America, and it took me a while to understand just how central it has been to British cycling. In one of his more eloquent moments, Hilton argues time-trialling is the purest form of cycling: a rider alone with the bike, the road, and the clock. He explains: “There is nothing like the feeling of riding a bicycle at maximum speed, at dawn, and alone. Concentration becomes meditation—or something else, almost beyond thought. It’s unlike anything else in the world of physical effort.”

When the book first appeared in 2004, Hilton described the English cycling world, as he knew it, as dying out. Club rides, time trials, point-to-point rides, and 12-hour rides remain important in some English towns, but, as he suggests, the riders are getting older, with fewer and fewer youngsters taking up the sport. I wonder if that’s changed at all since the success of Wiggo, Froome, and friends, but even if there is a British cycling revival, I doubt it looks much like the world Hilton knew and loved.