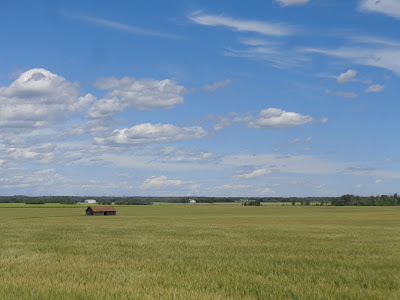 Most semi-serious Edmonton road cyclists know Halicz-Glidehurst—even if they don’t recognize the unwieldy name. It’s a 20-km zig-zag paved road that runs through a quiet rural area southwest of Devon, Alberta. The noteworthy feature of H-G (as I call it) is that it is the only paved back road in the area. It is surrounded by a grid of gravel. I’m not sure why H-G is paved; apart from being a back-door route to Devon, it doesn’t seem to connect anything to anything. But it’s an exquisite piece of asphalt for skinny-tired cycling, an unlikely but pleasant respite from truck-infested highways 19 and 60, and the kind of road you can ride down the middle of, most of its length, almost any time.

Now the name. It’s a mouthful, somehow even more than its four syllables, what with that exotic “cz” (which I have decided to pronounce “ch”), a hyphen, and those two long vowels on each side. I have no idea where the name comes from, but I imagine the first half to be of Ukranian or some other eastern European origin and the second half to be, maybe, English (like its neighbor Devon). Maybe it’s this juxtaposition that makes the name so strange. How did they come to be together? Was the hyphenal conjoining the result of some long ago marriage of diplomacy, meant to heal the wounds of an ethnic feud that festered along the southern shore of the North Saskatchewan?

Beats me. All I know is that the name feels distinctly foreign, some might even say un-Albertan. It makes me think of that troublesome duchy Alsace-Lorraine, for instance, or Guillain-Barré, of the syndrome fame. These are fancy, ten-dollar names; Albertans tend to prefer the simplicity of honest loonie place names like Busby, Wayne, and Gunn. In these parts, if it can’t fit easily on the back of a hockey jersey, then it ain’t a proper name. (Nugent-Hopkins is pushing it.)

But I like it. Halicz-Glidehurst. The Slavic harshness of the first half makes me think of a coiled spring or a punchy climb, and the smooth hardness of the second half’s consonants conjures release, tailwind, and downhill. It’s not Paris-Roubaix, but it’s got a certain poetry.