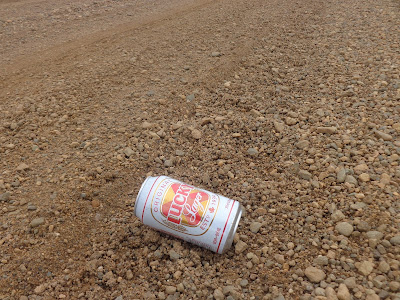 The second annual Dusty 100 Gravel Challenge took place on Saturday out by Victoria Settlement in Smoky Lake County. Five intrepid challengers assembled at the start line at 9 am under cloudy skies, with a light wind blowing from the southwest. After the traditional bugle call (which attracted some local wildlife), the party rolled out heading east from Metis Crossing, beginning the 107-km counter-clockwise gravel loop. The group vibe was downright giddy: it wasn’t raining and the gravel was (mostly) firm. The air was humming with the positive energy brought out by the fellowship of the wheel.


On the first segment, around the enchanting pine forests northwest of Victoria Settlement, we encountered more animals than vehicles. A black bear mom with three cubs crossed the road ahead of us at one point. Bigfoot Ryan saluted them with his whistle (why hadn’t I brought my bugle?), and after a brief pause, the bears ambled off into the bushes. Shortly after, we met up with a local on horseback who was so excited to see fat bikes that he stopped a few of us to chat about how his wife rides one every day on the nearby trails. We didn’t want to appear rude, so we visited for a few minutes before saying farewell. We were on a challenge, after all. 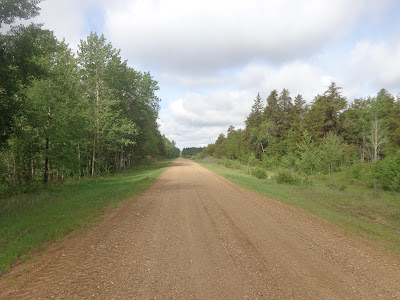 Kilometers 40-60 of the route along Township Road 592 between Smoky Lake and Waskatenau make up the most trying part of the course. It’s the flattest, straightest section of the route, and that's the problem. It seems to go on forever. It’s officially known as the Warspite Straightaway, but some Dusty Challengers have taken to calling it the Mind Warp Zone.

Part of what makes it tough is the knowledge that exquisite baked goods and impossibly flowery bathrooms await at the Waskatenau Petro Can Station at the 60k mark. (The legendary PC is the only supply point on the route, and it’s only natural that riders get impatient to reach its magical Surprise Bags.) Several times I thought I glimpsed the silhouette of the PC off on the horizon, only to have it morph into an old red barn or oddly shaped tree. 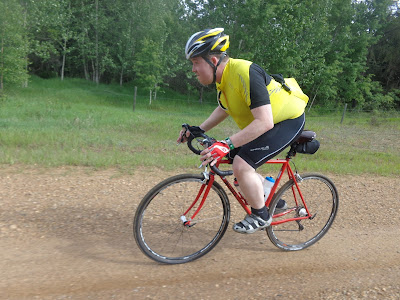 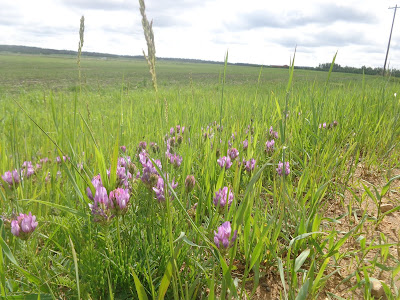 That particular day, the road 592 happened to be littered with Lucky Lager cans, no doubt the remnants of a cheap-beer-inspired joy ride by some Smoky Lake-ites the night before. A can would appear on the road about every kilometer; after a while, it felt like we were stuck in some space-time loop (Didn’t we just see that can?), doomed to ride the same dull gravel click over and over, never quite able to reach the bacon-wrapped delights of the Petro Can.

But reach them we did, eventually, and the feast was on. There had been speculation that last year’s Dusty Challengers had exaggerated the charms of this rest stop, that surely its treasures couldn’t be all that good. For the skeptics, I have four words: bacon-wrapped cheese wand. Okay, two more: Still warm. 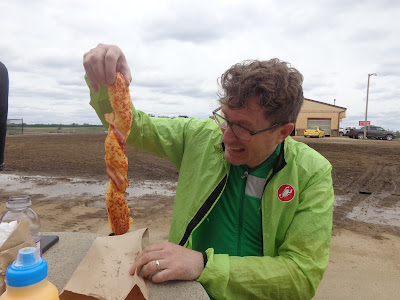 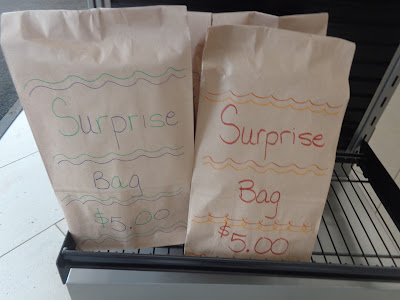 This is not just due to the restorative powers of bacon and cheese. The second half of the Dusty 100 route is the best part, mostly along the historic Victoria Trail, which follows the contours of the North Saskatchewan River. The road is narrow, especially on the far western section, and feels like an actual trail more than a road. Glimpses of the river pop up from time to time. Vehicles are especially rare on this part. You feel like a voyageur on wheels.

By this point, however, on the home stretch, the field had split apart. It was every man for himself—or against himself, in some cases. The scenery was lovely, and while some still paused briefly for photo ops of kidnapped LRT shelters and such, for others, the challenge was foremost. Penn C. Reveaux, inspired by a spirit-owl flyover, was first across the line, setting a course record of 6 hours and 23 minutes. Three others finished in short order. One challenger was DNF, but he vowed to be back for next year’s bugle call. I respect his attitude toward unfinished business. 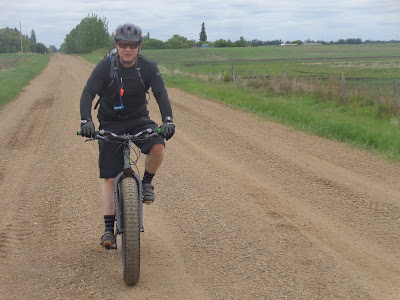 Special kudos also go out to Bigfoot Ryan, who completed by far the longest ride of his life, and made it look easy, despite almost complete ass failure on the Warspite Straightaway. And he was the first Dusty 100 challenger to complete the course on 5-inch-wide tires. Fat props to you, BF Ryan!

We celebrated at the parking lot—not for long, we were all pretty shattered—raising a glass of chocolate milk to M. Reveaux, to the fine day, to the gravel gods, and to all the Dusty Challengers, those who made it and those who’ll make it next time.
Posted by Jasper Gates at 10:53 AM