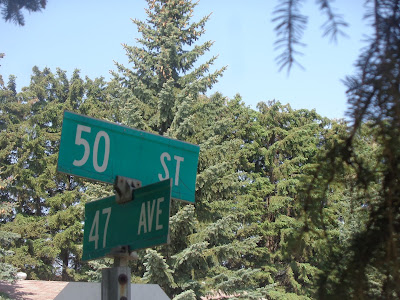 One of the many pleasures of riding a bicycle in rural Alberta is visiting small towns, little villages, and dinky hamlets that I would almost certainly never pass through otherwise. Some of these are sad (Torrington), some are charming (Duchess), and some seem to barely exist at all (Rollyview?). In any event, I always get a small thrill rolling into a new place, no matter how miniscule, and getting the lay of the land, scoping out the main drag, locating all the usual small-town landmarks—the post office, the Chinese-Canadian restaurant, or the buildings that once housed such stalwarts.

One phenomenon I’ve noticed over my years of cycling to and through a lot of these rural communities is the curious street-numbering system found in a lot of them whereby the main street is called 50th  Street. Not Main Street or First Street but 50th Street. This has always struck me as odd. Why 50? The smaller the settlement, the sillier this method seems.


Riding through tiny Chipman, Alberta, east of Elk Island National Park, for instance, you see how the entire village of about six square blocks spans 47-52 Avenues and Streets. Where are streets and avenues 1-46? Were the town founders being optimistic about Chipman’s long-term potential for sprawl? Did they assume that a thriving metropolis would one day ripple out in every direction from Chipman’s humming downtown nucleus, the intersection of 50th Street and 50th Avenue?

I’ve often wondered where this numbering system comes from. The numbered grid is common enough  in big prairie cities, but I’ve only ever seen the central 50-50 axis approach in rural communities here in Alberta. A little digging on the interweb reveal that this street numbering approach is, indeed, a uniquely Alberta thing and that about 40% of the province’s municipalities use the 50-50 intersection as a centre point, though this method may have originated, in principle, in Edmonton, where the intersection of 101 Street and 101 Avenue is the geographic centre, with an orderly grid rippling outward.

Story has it that in the 1920s, natural gas supplier Northwestern Utilities was so fond of Edmonton’s approach that they insisted on it being used in their growing gas network—municipalities were told they had to adopt the 50th Street/50th Avenue midpoint in order to get gas in their communities. I can only guess that Northweatern somehow thought that reducing the Edmonton scale by half would be a handy one-size-fits-all model for every smaller community.

In some of the larger towns and smaller cities, like Leduc and Red Deer, this 50/50 grid system has actually worked out nicely in the long run. The communities have spread out significantly and streets and avenues now extend down to the 30s or even 20s. But even in these places, the newer neighbourhoods on the outer fringes have often abandoned the numbering system altogether in favor of named streets, which are better in non-grid neighbourhoods, ones with loops and crescents and cul-de-sacs. 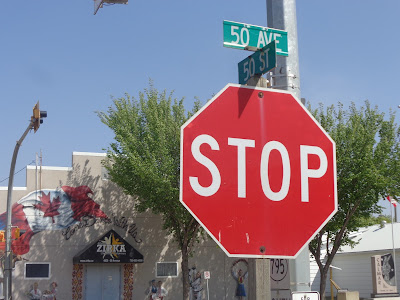 But in little two-horse Alberta towns like Robb, Breton, and Warspite growth has rarely reached 47 Street. As I pedal through these places, I always smile when I see the two signs at the quiet, traffic-free central intersection: the corner of 50th Street and 50th Avenue. Only in Alberta.