It’s hard not to think about water here in Alberta this week, what with the crazy flooding in the southern part of the province. In Edmonton, where I live, we’ve been spared the worst, but the river is as high as I’ve ever seen it. The other day I went out for a spin through the river valley so I could get a good look at the brown torrent we call the North Saskatchewan, and I ended up at one of my favorite hangouts, the Fort Edmonton Footbridge (FEF).

The FEF is the city’s newest and coolest bridge. Completed in 2011, this suspension pedestrian bridge connects the west end communities of Oleskiw and Westridge on one side of the river with the neighbourhoods of Riverbend and Fort Edmonton Park on the other. But when you are standing on the bridge looking around, you can’t really much of any of those places, because the river valley is so leafed out. Instead, the FEF looks like a fancy new urban bridge connecting a bunch of forest to another bunch of forest. In fact, the bridge is located in such a spot that it’s hard to find a good prospect to view it at all. You can’t quite glimpse it from the busy Quesnel Bridge on the Whitemud Freeway; better to stand up on the edge of residential Patricia Heights if you want a good boo. Given its relatively remote location and the fact that it’s a foot bridge, I suspect many nearby residents don’t even know the bridge is there. 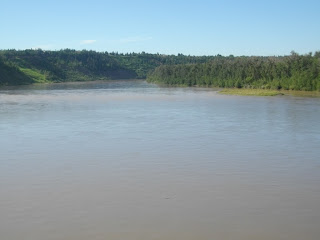 Which is a shame, because it is a stunning piece of architecture—not just a physical connection between two places but a neat destination in itself. The bridge features a couple of belvederes, little pocket rest areas with benches and shade structures. In this sense, it reminds me a bit of the Pfluger Pedestrian Bridge in Austin, Texas, though that is a much wider structure and right in the middle of that city’s more densely populated downtown. In Austin last year, I was fascinated by how the Pfluger was a truly pfunky hangout; sure, I saw lots of runners and cyclists crossing it, but there were also all kinds of folks sitting on benches, reading books, listening to music, chatting with friends. It felt like the very heart of the city and was something of a revelation to me: a bridge that not only connected physical places but fostered connections between people and art, people and nature, and people with each other. 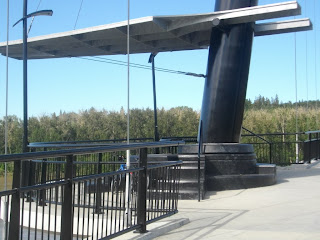 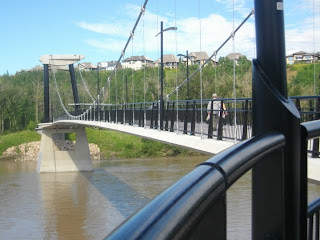 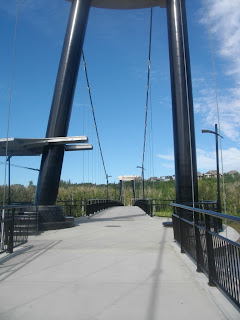 The FEF, in contrast, is comparatively deserted. I’ve never seen anyone other than me sit on its benches. And it has a different feel—quiet, peaceful, remote, and almost wild. I don’t see many cyclists using it, perhaps because it has a killer, steep-ass gravel approach on the Oleskiw side, which scares off some of the skinny-tire set. Or maybe because people just haven’t discovered it yet.

The upside is that for now, anyway, the FEF feels like a secret place, one that is somehow both cosmopolitan and wild at the same time. A perfect spot to lean your bike against a rail, take a load off, and watch the debris float by for a few minutes. 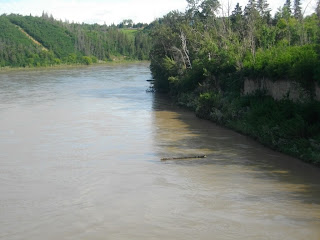