Okay, so maybe I’m taking some poetic license with that line, but I do so to make a point. It’s unlikely that the above misquoted statement would ever be uttered by a cyclist. Anyone who’s ridden a bike any distance knows that road conditions greatly influence the quality of a ride. The slightest differences in road surface (not just concrete vs. tarmac vs. cobblestone, for instance, but the kind of each of those), the number of cracks and potholes, the quantity of sand or dirt on the street—all of these factors play a role in how you roll.

This is even more true for gravel grinding, where factors such as moisture, depth, and composition of the road surface can vary so wildly from barn to llama that cyclists who ride on gravel a lot begin to develop a keen eye for what you might call gravel classification.

Therefore, I propose the creation of a cyclists’ Glossary of Gravel, a kind of database of dirt, a thesaurus of thesand, if you will. The idea is to identify particular types of gravel, give each one a creative name, and describe its essential features, from a cyclists’ perspective. These should include, at a minimum, what that type of gravel looks like (color, depth, density, composition, consistency, texture) and what it feels like to ride on. Food analogies are encouraged, as are personal anecdotes explaining names. A photo of a representative sample would be nice too.

To get the ball rolling, here are a couple I came up with while out gravel grinding with Penn the other day. I’m open to suggestions. I see this as a collaborative work in progress.

Hardscrabble: Lots of big, loose stones, the kind that pop sideways when a highly pressurized road-bike tire rolls over them. These can  make for slow going on a road bike, though wider tires go a long way to compensating for the looseness of the surface. Hardscrabble comes in a variety of types, ranging from  rounded river rock (pictured here) to sharper mountain rock in some locales. 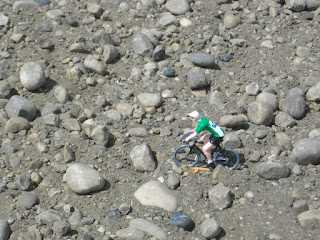 Alberta Beach: Dusty, deep gravel that’s mostly sand with some little pebbles for garnish. The sand can be up to an inch deep, making for tough slogging unless you’re riding a fat bike. The name for this comes from a long, dusty gravel road Val and I took out to Alberta Beach a few weeks ago. Aviator goggles, sandals, and pails and shovels are recommended on this stuff. 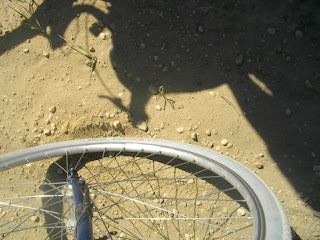 Worm Slick: So named because of the actual dead or dying worms found stretched out on the spongy gravel after a heavy downpour, like so many drunken freshmen passed out on the frat house floor. Why the worms get crazy like this when it rains, I have no idea. But what I do know is that their little noodly corpses make for slick conditions. Pedal with caution on this stuff. 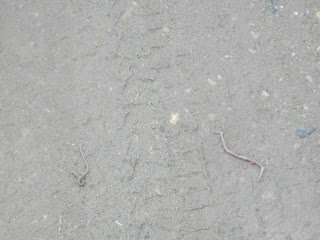