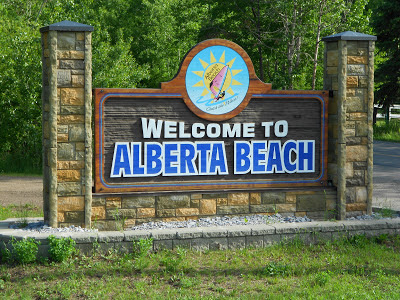 One of the highlights of last year’s riding season was a May day-trip with Val and Penn out to Alberta Beach, a village on Lac St. Anne, about 75 km northwest of Edmonton. I’m not exactly sure why this ride stands out in my memory. Maybe it was the turtle hordes. Or perhaps the healing waters. Or, possibly, the exploding beavers. Whatever the reason, I have fond memories of this day.

This ride was Val’s initiative: he proposed it, mapped out the route, brought the camera. Penn and I just showed up and followed. I recall that Val chose the destination, Alberta Beach, after seeing it on the map and noting its proximity to the city. Now the word “beach,” in this context, has to be taken with a grain of, well, sand. For those of you not from these parts, Prairie lakes tend to be shallow, murky, algae-gunked affairs; a prairie “beach,” then, refers to a ribbon of sand beside one of these large sloughy bodies of brown, leech-infested water. For newcomers to the prairies, this loose interpretation—perversion, really—of “beach” can be a cruel lesson, often learned the hard way.

But, hey, Val didn’t know this. He’s still relatively new to Alberta and was curious about this resorty-sounding place on the map. Meanwhile, Penn and I, more jaded prairie veterans, figured the trip to the “beach” would at least be good for a laugh when we saw the look on Val’s face when we got to the plage. 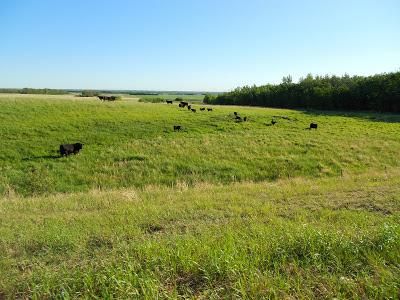 Val’s route out to the lake was a perfect zig-zag of gravel roads and quiet paved highways featuring the best of rural Alberta riding: aspen trees, cows, pick up trucks, Ukranian churches, range roads, hawks, gravel pits, pump jacks, llamas. The sun was shining, the wind was slight, the fields were green, and summer was beginning to seem like more than a theory. 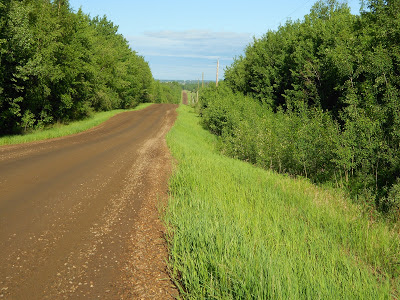 The village of Alberta Beach proved to be surprisingly charming, in that way of slightly dilapidated, tacky, small-town resorts. It was too early in the year for tourists; the streets were deserted. But some establishments were open for locals, including the gem of a café. By “gem,” of course, I mean an eccentric, heavily turtled coffee-and-sandwich joint. The sprawling grounds of the converted cottage were bedecked with tacky turtle trinkets: turtle pictures, turtle sculptures, turtle signs. Sitting on the patio with our Americanos, we felt like we were visiting a gigantic terrarium of kitsch. But the coffee was above average, the toilet facilities unconventional, and those features, combined with a general air of quirkiness, made the turtle café a worthy destination in itself, never mind the skimpy sand or magical waters of the village. 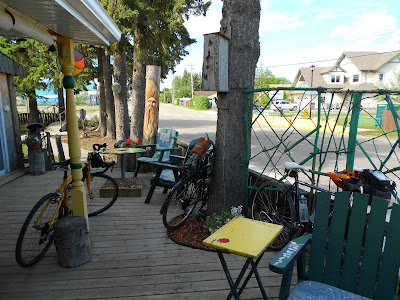 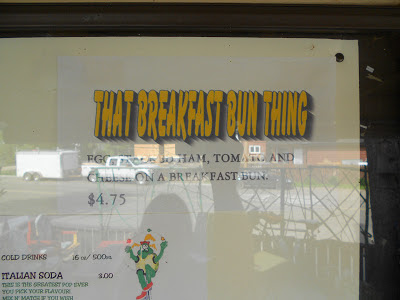 I’d forgotten that Lac St. Anne is a pilgrimage site. Every July, thousands of people, many of them First Nations, make the trek to the lake in order to take a dip in the supposedly healing waters. (This pilgrimage is a curious hybrid of First Nations’ and Catholic spiritual traditions, which sort of merged in the mid-nineteenth century, when a Catholic Mission was built at the Metis settlement on the lake.) Folks around here will tell you stories of miracles, and across the lake there is a shrine to the pilgrimage, complete with a pile of discarded walkers and canes. Penn figured it couldn’t hurt to dip his toe into the chilly water. You never know. Val and I cheered him on as he peeled off his sweaty socks and took the plunge. 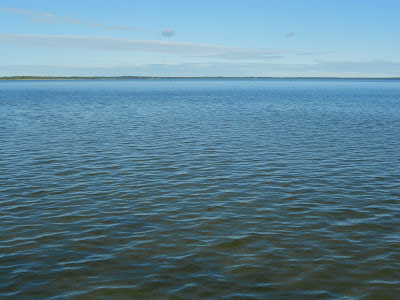 As for the actual beach, there really wasn’t much to speak of, just a few metres of clearly imported sand between the small grassy park and the water. But we were enjoying our time in A.B. so much that I forgot to check Val’s face for signs of disappointment. 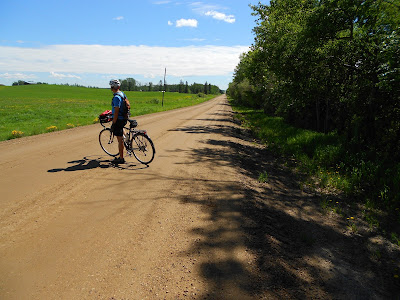 The ride back felt quick, buoyed as we were by our brief holiday experience. We didn’t care that we had sand in our cycling shoes or that we were almost certain to experience turtlish nightmares.

Oh yeah—the beavers. I fibbed a bit back there—we didn’t see any actual beavers explode; rather, it was a beaver dam that got blowed up real good. On our way home we saw a couple of County of St. Anne workers on demolition duty, sent out to deal with a dam that was threatening to cause flooding along a country road. Workers stopped us and let us watch the show. Val caught it on video.

Heartened by the all-too-rare spectacle of an explosion, we rolled on back toward the city. Penn pressed the pace, no doubt fired up by the magical waters of the lake. It was a pretty much perfect day at the beach.
Posted by Jasper Gates at 9:48 PM