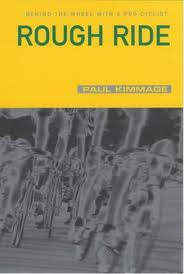 Eventually I will read Tyler Hamilton and Daniel Coyle's recent tell-all book about the dark side of professional cycling But before I do that, I decided to go back and pick up the original expose of the peloton, Paul Kimmage’s Rough Ride. First published in 1990, it describes the “unglamorous” life of a domestique—routine doping, race buying, and politicking in the peloton—in a way no one had dared to do before. Kimmage took a lot of heat for the book. The title could easily refer to the book’s reception in the cycling community; Kimmage lost friends, made enemies, and earned a reputation as a code-breaking renegade, even a pariah. He once even described himself as the “Salman Rushdie of the cycling world,” such was the unofficial fatwa cast over him by his book.


Although Kimmage quit racing in 1989, he’s remained a presence on the pro scene through his journalism in the UK. Well, presence isn’t really the right word for what many cycling insiders considered Kimmage to be. More like supreme shit-disturber, whistle-blower, PED alarmist, Armstrong vilifier (see his famous exchange with Armstrong, regarding Kimmage’s assertion that Lance was a “cancer” on the cycling body), and relentless critic of the UCI. (He’s now suing the UCI, in fact, just for something to do, it seems, now that the Armstrong crusade is winding down. He seems to need to be in take-down mode.)

Given the recent events vis-a-vis Armstrong and Hamilton, it seemed right just now to go back and see just how rough the ride really was for Kimmage.


As an Irish teenager, Kimmage loved cycling, but once a pro, he gradually felt that love fade away. The life of a domestique in France in the 1980s was certainly no pique-nique. Riders had zero job security, were forced to race inhumane schedules (these were the days of split stages in the Tour de France, with some days featuring two separate stages), and were generally at the mercy of a team’s directeur sportif, who held supreme power, often arbitrarily exercised. After one of Kimmage’s first pro rides in France, he finds himself in a crappy hotel bathroom with a veteran showing him how to hand-wash his mud-splattered team kit. Hardly the glamorous life he had imagined.

A big part of what turned Kimmage off cycling was the doping. On the one hand, Kimmage’s portrayal of the deeply ingrained doping culture is still startling, with all its casual syringes, even though we have known about this for ages now. The system of anti-doping controls was laughable. Everyone knew when and where testing would occur, so riders could and did manage their drug use around the testing regimen.

On the other hand, though, the unsophisticated doping Kimmage describes is relatively quaint compared to what would happen a decade later. Kimmage recounts riders routinely using amphetamines before and during races, but little more than that. Some steroids are mentioned but Kimmage suggests that hormone regimens were still too new and sophisticated for most pro cyclists to experiment with. It all sounds pretty tame compared to the stuff you’ll find in USADA’s Armstrong decision.

As for Kimmage himself, there’s something sweetly naive about his innocence when he first encounters dopers. He says he was shocked by what he saw, and swore to never try drugs. The other riders teased him about his “chastity,” but generally left him alone. At first, he was even squeamish about taking perfectly legal, commonly consumed substances such as caffeine tablets and vitamin B12 shots.

But as the life of a domestique grinds on, and he watches dopers consistently beating him, Kimmage finds himself tempted, and he admits to trying them—not so much to win, but rather to simply finish races and be able to go again the next day. Kimmage discovers that amphetamines do, indeed, work. But he can’t live with the feeling of having cheated, so he resigns himself to competing at a disadvantage and begins dreaming of an alternative career path—journalism. This might be the most interesting aspect of the book, Kimmage’s gradual transformation from rider to writer.

True, after only a few years in the pros, Kimmage didn’t actually enjoy cycling anymore. It was a job, a way to earn a living, but many parts of it—especially the relentless pace of classic racing—he hated. But there’s more to this book than bitterness. There are moments of genuine joy for Kimmage. One highlight of the book is his journal-style account of his first Tour de France in 1986. Although he finished 131,st he did finish. And Kimmage conveys the intense sense of accomplishment that comes from enduring three weeks of suffering and riding into Paris and feeling like a “Giant of the Road.”

Another powerful, but darker, episode involves the despair he felt in abandoning the Tour in 1987. In shorter races, classics especially, abandoning was no big deal, and Kimmage, like many domestiques, thought nothing of packing it in after his work was done for the day. But in a grand tour, abandoning involved a certain shame, and Kimmage captures the profound disgrace he felt after calling it quits on Stage 21 on the Galibier—empty legs and demoralized spirit did him in.  This ended up being particularly tough for Kimmage when fellow Irishman Stephen Roche went on to win the Tour and Kimmage had to watch the decisive time trial on tv. He could barely stand to look.

Kimmage is frank in his assessments of other cyclists . Bernard Hinault: “weird,” “I didn’t like him;” Alexi Grewal: “obnoxious;” Sean Kelly: complicated, tough to get to know, but ultimately honorable. Stephen Roche? Ah, this one is interesting. After the publication of Rough Ride, Roche claims he felt betrayed and refused to speak to his compatriot. At first, this seems puzzling, since Kimmage has nothing but praise for Roche’s talent, generosity, and friendship in the book. And he says nothing about Roche doping. The problem is that Kimmage also says nothing about Roche not doping—that together with Kimmage breaking the code of silence was enough to end their friendship.

Kimmage was in a tough spot, one kind of similar to Lance Armstrong’s dilemma in his Oprah interview. Kimmage set out to tell his story, including his dabbling with drugs, but he was clearly reluctant to rat out others by name. But at some point it becomes impossible to convey a clear sense of what was happening  without implicating others, even without naming names. At least some of Armstrong’s evasiveness with Oprah probably came from being in a similar predicament—though Armstrong had a lot more to cover up and to lose. It makes you realize how tricky it is to write a book like this, when you hold back from telling the whole truth, even if for honorable reasons, in Kimmage’s case.

In the final couple of chapters, Kimmage shifts away from his engaging autobiographical mode and into a polemical one, reflecting on the messed up nature of pro cycling, his own pariah status, and the long term effects of doping on the dopers. Strangely, I found these chapters the least compelling part of the book—perhaps because they now sound so dated and pathetic and true, given all that’s happened between 1990 and now.

Makes you wonder how long it will take—or if it’s even possible—for the cycling world to ever hit smooth, clean pavement.