Assembling a bicycle from scratch, watching its essential bike-ness evolve, raises a metaphysical question: When does a bike-building “project” officially become a bike, as opposed to a collection of parts or a work in progress. When exactly is the official moment of bike conception?

Is it when the drive train is complete? When the wheels are attached? Or is it not until the whole shebang, bottle cages and bells, are attached? (Should the building of the frame be considered the moment of conception, or can we not properly speak of a bike until it emerges fully formed from the shop, like a full-grown Uruk hai popping out of Saruman’s slimy birthing pit?) I was thinking about this the other day in Val’s garage, as we made significant progress on the MB 2000. 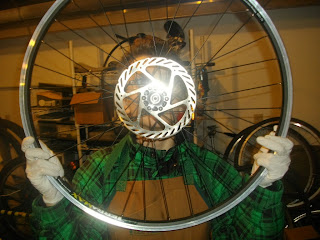 Say all you want about the soul of the machine being the frame or crankset or headset or wheels or the points of contact (handlebars and saddle). For me, the magical moment of transformation—when the frame and components truly became Gil’s bike—was when we put on the $10 custom-made decals. I know this sounds silly. How can something so superficial as a bunch of cheap stickers possibly effect a profound metamorphosis? I don’t know, but I’m here to tell you that the instant Gil and I stepped back and sized up the freshly applied decals on the top tube, something . . . happened. The MB 2000 was born.

Sure, painting the old frame was a big step in the process; the teal paint job erased or covered up the bike’s past, gave it a fresh re-start. But until we put the decals on the other day, that frame had a certain blank, naked quality. It was clean but characterless, waiting for some kind of personal imprint. 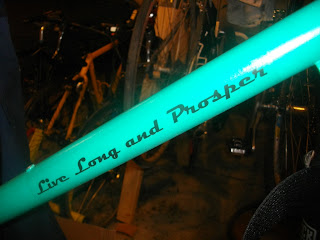 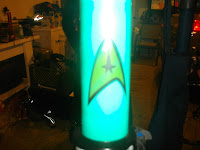 Gil chose a Star Trek theme for the head badge and long-tube stickers, an homage to his current fave sci-fi franchise. The sage words of Mr. Spock are a timeless and classy choice, I think, especially when I consider some of the alternatives a 12-year-old might have picked (Sponge Bob crudities? Bieber lyrics? Minecraft gibberish?). With these custom lines now inscribed, the MB 2000 is now fully Gil’s machine, ready to boldly just go. 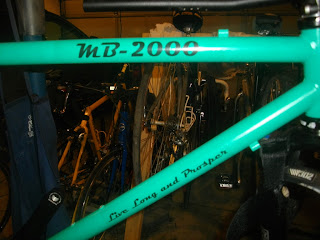 The full and true character of the MB 2000—its quirks and rattles, tendencies and tics—will no doubt show itself on the trails in the coming months. But it already feels like it’s got a budding identity that is uniquely of Gil’s making, a certain individual panache. The decals say so.
Posted by Jasper Gates at 5:13 PM