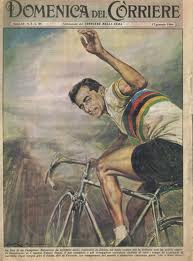 Pardon me while I adjust my woolen tunic, roll down my white socks, add another dab of Brylcream to my ‘do, and prepare a fresh bowl of pipe tobacco. You see, I’m getting ready to be heroic. Or at least to look heroic, in that old-school, euro-cyclist way. Think Fausto Coppi circa 1947. Why am I so attired? Because I’ve been thinking about—no, more than that, getting ready for—a heroic bicycle race I recently discovered, one that seems tailor made for the Dusty Musette crew—The Cino Heroica, held near Kalispell, Montana, in September.

According to the race website, The Cino is a
celebration of the cycling days of old when road racing in Europe meant racing on unpaved dirt roads over mountain passes, in sometimes horrific conditions. The racers rode steel framed bikes that were built as much for toughness as for speed. They drank wine and smoked Gitanes to quell their suffering. “Nutrition” was real food, like cheese, salami, and a baguette. Suffering was an art form taken to a new level by these riders, as they collapsed into the arms of their handlers at race’s end, their faces reflecting something that non-riders will never understand. But at the end of the day, it was all about style, the horrors of the struggle erased by the pasta with truffles, crystal goblets of Chianti and polite conversation.
Ah, now this is my kind of bike race. Which is to say, it’s not a race at all, but rather a half-ironic group gravel ride, part homage to cycling’s past, part silly pageant, all fun/perverse endeavor.

Here are the deets: Two days of riding on gravel roads, 60 miles the first day, 50 miles the second, with an overnight at a remote hot springs. Riders are encouraged to wear vintage cycling costumes: wool jerseys, leather shoes, hairnet helmets, white socks. Food will be in the form of a potluck; baguettes will abound; energy chews will be frowned on. Ashtrays will be provided at all rest stops. (No mention of whether amphetamines, an essential of this era of heroic cycling—Coppi gobbled them up like Mike and Ikes—will be part of the buffet.)
Sounds like good-weird fun, I know. But there’s a twist. All first-time riders (this is the 7th annual Cino) are required to ride a “heroic bike.” In order to qualify as “heroic,” a bike must have at least three of the following features:
In addition, suspension forks and carbon frames are strictly verboten. All manner of old-school accessories, such as frame pumps and handlebar mounted water bottles will win you extra hero-cred.

For some semi-serious cyclists this “heroic bike” business could be problem. Oddly enough, though, I’ve got just such a heroic machine sitting in my garage: my semi-retired 1983 Bianchi road bike, which I bought in grade 10 for the then-princely sum of $350, and, which, until recently, I’d been using as a fair-weather commuter. I’ve been wondering, for a couple of years now, why I’ve hanging on to this Italian chestnut. (Nostalgia is a powerful force.) Now I know. It was meant to go on one more heroic mission. The Cino may not be every cyclist’s cup of Chianti. But is sounds perfect for us. Penn is always up for unique and ingenious forms of bicycle-induced suffering; Val’s always had a cycling purist streak, a jones for fixed-gear rides, anything difficult and pure. Me, I’ve got a thing for cycling history and any pursuit that actually encourages riders to smoke a pipe during rest stops.

So we’re on the first-timers’ waiting list and will find out in June if we made the cut. In the meantime, our wineskins are full of brandy; we’ve stuffed packs of Turkish cigarettes into our old musettes. We are ready to be heroes of the bicycle, if only for a weekend.
Posted by Jasper Gates at 2:39 PM