"Hey! Hobo on a bike!” That’s what my 12-year-old son said when he looked at the photo on the cover of Bernard Magnouloux’s classic Travels with Rosinante: 5 Years’ Cycling Round the World. And the boy is bang on. Bernard Magnouloux (BMag) does, indeed, look like a hobo on wheels, what with his grizzled beard, patched up mish mash of a wardrobe, and beat up bicycle loaded with all manner of suitcases, ratty sleeping bag, and what appear to be the pelts of several wild critters. All that’s missing is the pole with a red kerchief wrap. 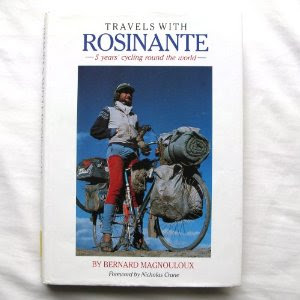